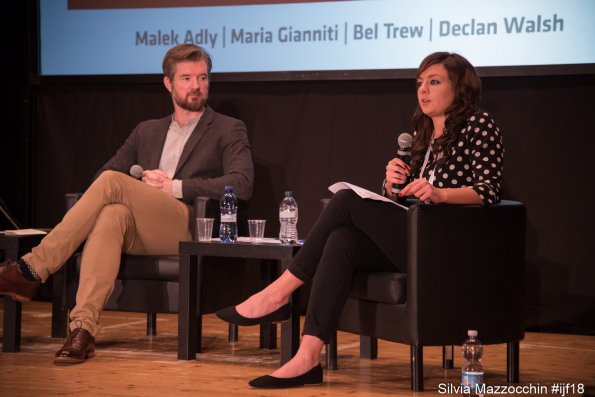 Speakers at the “Al-Sisi’s Egypt: elections, repression, the Giulio Regeni case” panel during the International Journalism Festival discussed some of the main issues about the Egyptian Government and the repercussions suffered by journalists because of the regime.

Declan Walsh, Cairo bureau chief at the New York Times, talked about the doubts over the legality and fairness of the latest election in Egypt. He said that “in order to avoid the embarrassment of a one horse race”Abdel Fattah al-Sisi found another candidate for president whose name no one knew before. To obtain the necessary turnout to give the elections some sese of legitimacy, al-Sisi used different tools to woo voters such as giving away boxed food or threatening to cut the pensions and salary bonuses if people did not vote.

Even though the situation was though, there were some people who perpared to stand against al-Sisi. “These were people who came at the very least from the sort of ruling establishment in Egypt” Walsh said “[All of them are now] marginalised, side lined or jailed”.  Still, it indicated that even people from the political and military elite of Egypt don’t feel comfortable about the current regime where no parties exist and where the freedom of speech is forbidden.

Bel Trew, a journalist for The Times, focused on the issue of freedom of speech in Egypt sharing the story of her terrifying experience. “Мy story is an important indicator about how Egypt is right now,” she said.

Trew had been living in Egypt for 7 years when, in February 2018, she went to do an interview about the migrant crisis in Europe. Shortly after she got arrested by Egyptian national security forces bacause of a rumour claiming she had been investigating cases of enforced dissapearances. She remembered the police had not been interested learning the truth: she was not given access to either her lawyer or the British embassy and she was accused of defaming the state –  a criminal charge in Egypt. She said: “You get arrested, you end up in the police station, no one knows where you are and the police usually lies to family members or concerned collagues about whether [you] are in the police station or not.”

She was given the choice of staying in Egypt to face a military trial or immediately leave the country, which she did shortly after her release. But Trew added that not everyone gets to have a choice. She highlighted how unexplained dissapearances has become a huge problem in Egypt: “1500 people have been forcibly disappeared in the last 4 years at least. So that means people just vanish, usually into horrible jails and prisons”.

Walsh also touched upon this problem: “People are taken into custody, usually by some security agency, and then there is no legal process so their lawyers don’t know where there are, their families don’t know where they are. They are held in detention centres that in some cases people don’t know exist, people may not even know where they are being held. Abuse, torture, intimidation, pressure – these are all things hat are common in these places. And people can be picked up for any reason”.

The reasons for forced disappearances vary from political alignement to sexual orientation. The gay community, Walsh said, is now more than ever under pressure in Egypt as the police allegedly exploits dating apps to find LGBTQ+ members to arrest them.

Trew remembered the times in Egypt under former president Hosni Mubarak and drew a comparison with the current situation, saying there was more freedom, opposing parties and protests were allowed. It is now a new era during which  journalists who cover Egypt are forced to self-censor in order to avoid issues with the regime.

Concluding the panel Walsh also referred to the case of Giulio Regeni, a UK-based Italian researcher brutally tortured and murdered during a visit to Egypt. The Cairo bureau chief said that when it happened Italy accused Egypt and wanted to make an investigation but even though “some material has been handed over and we have seen announcement (…), we haven’t seen many results yet” .  Italian prosecutors have yet to learn something concrete about the case while Egypt continued to operate a well-oiled system established to keep the Government from embarrassing moments.