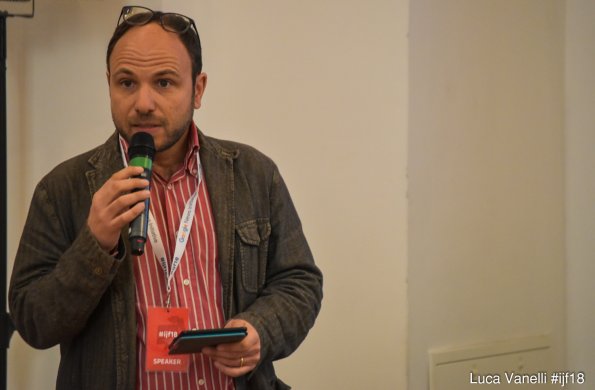 Climate change is changing not only our lives, but also the lives of species like penguins, fur seals, whales, and krill fish. Industrial fishing and tourism pose further threats to the biodiversity in Antarctica, as Al Jazeera environmental editor, Nick Clark, explains during his talk “Battle at the poles” at the International Journalism Festival in Perugia.

In his reports from Antarctica, Nick Clark stresses the need for urgent measures in order to protect the intact, pristine nature that has for long stayed out of human activities such as industry, research, and tourism. The recent decades, however, have brought changes to the continent: cruise ships can often be seen approaching the shores of Antarctica, while bottom fishing, the usage of plastic and coal threaten the lives of thousands of species there.

One of the main threats to the biodiversity in the Antarctic Ocean is harvesting krill fish. Due to human interference, krill population is said to have declined by 80 percent in the last decades. We use krill fish for health supplements like krill oil and food for fish farms. Marine species such as emperor penguins and blue whales feed on krill and their survival is dependent on the abundance of this little fish.

Antarctica is becoming more and more popular with tourists. While only around four to five thousand tourists a year visited the continent at the beginning of the century, now the number of tourists has reached more than 30 000 per year. Tourism in Antarctica is regulated by the International Association of Antarctic Tour Operators and there are special rules one needs to follow when visiting such as disinfecting and following special rules in order not to bother the animals. Still, there are cases of tourists deviating from the rules and going very close to the animals, which may disturb their day-to-day life and cause them to leave their mating areas. Nick Clark explains that there is no way to ban tourism and that there is a place for tourism in Antarctica, but it has to be carefully managed so that this incredibly fragile arena stays undamaged.

Although some countries have signed the Antarctic Treaty in an international attempt to protect the natural resources in Antarctica, there is still a lot to be done. The German government backed by the European Union has come up with a proposal to help protect the marine areas in Antarctica and has submitted a request for a marine protected area in the Wedell Sea, a sea with deep embayment of the Antarctic coastline. International organisations such as Greenpeace have backed the proposal with a petition for protecting the Antarctic Ocean Sanctuary. The proposal aims at reserving the marine protected area only for scientific research and thus, limiting commercial fisheries, “but it does need governments to engage,” stresses Nick Clark.