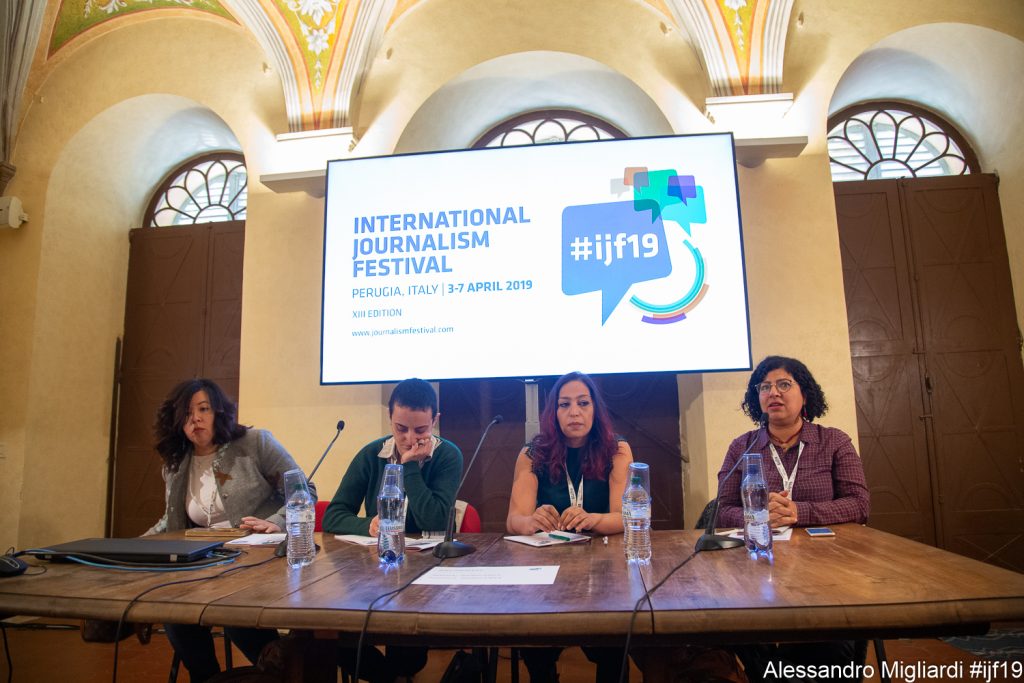 Egypt tops worldwide statistics for its rampant culture of sexual assault both in the workplace and on the streets. From inappropriate conversations to being pressured by bosses into exchanging sexual favours with sources, women in the newsroom share “stories are repetitive everywhere in the world”, says Lina El Wardani from Ahram Online. “The only thing”, she adds, “is that it’s still a taboo in Egypt”. Despite the popularity of #MeToo in the country, the movement has also received a lot of pushback, and those brave enough to come forward with allegations face very real consequences. This was the case for May Elshamy, who was fired from her position at Youm7 after speaking up against her former boss’s sexual misconduct and denied a visa to talk at this year’s International Journalism Festival. Her case was quickly dismissed by the courts and she is now fighting a lawsuit brought by her victimiser.

According to journalist and author Donia Kamal, one of the most fundamental problems about sexual harassment is that it is hard for people to call inappropriate incidents by that name. She has worked in newsrooms from the United States to the Gulf and experienced sexual harassment everywhere. She describes incidents where co-workers were forced to discuss their sexual lives with colleagues or featured in pictures taken without their consent when they were wearing skirts or dresses. In each and every case there was reluctance reach out to others and discuss what they went through, up until Kamal left the network and wrote about her experiences, only to be contacted by many colleagues who shared the same story. She referred to her attempt to take legal action as almost impossible when it comes to the Arab world”. She soon found out that the practices were common knowledge and was told to deal with it by herself.

“I don’t know a single case that actually went to court and it won”, says El Wardani, bringing the conversation to the initiatives that are being implemented in Egyptian newsrooms to circumvent the lack of support provided by the legal system. As a progressive media space, Mada Masr did not adopt an official policy against sexual harassment until four years after the project was started, something that the organization’s own publisher Lina Attalah defined “problematic”. They decided to team up with Egyptian Initiative for Personal Rights (EIPR) to draft a survivor-centered policy with strong confidentiality protections inspired by those implemented in other newsrooms. The text comprises of a series of steps to be taken only in full agreement with those lodging the complaint, taking into account the temporal dimension of consent and defining “the workplace” to include spaces outside of the office, such as event areas and interview sets.

“Life is complicated and it’s so easy to be righteous about these things”, comments Attalah. “I am really struggling with the question of community justice and reparative approaches” she continues, raising a series of difficult points. “How do we deal with harassers, beyond making sure that they are out of our spaces? Are we fine with them going and doing that thing elsewhere? How do we really try to cultivate a culture of self-reflection, or reintegration even?”. In order to respond to preventive concerns, Mada Masr organizes psychoeducational sessions to raise awareness among staff members on how power dynamics can be invisible yet structural and need to be acknowledged in everyday gendered relations. In parallel to drafting anti-sexual harassment policies, the organization has also implemented anti-bullying initiatives grounded in intersectional principles, since violence can take many forms in workspaces where people from vastly different socioeconomic backgrounds interact.

Fatemah Farag, founder and director of Welad Elbalad Media LTD, is also in charge of the WAN-IFRA Women in News Program for the MENA region. This initiative provides newsrooms with trainings on sexual harassment and has published a handbook to address the issue. “When we first started out we found that for the women who are usually mid to senior level”, she explains “the issue of sexual harassment would come up within the newsroom, with their sources, as a part of daily work. This was something that they confronted and not just in Egypt but also in other parts of the Arab world”. Despite the pervasiveness of the problem, she often observed a disconnect between senior executives and female staff members, whether that was because of willful ignorance or because they were themselves part of the problem. The handbook was born for both people in managerial positions and other employees, to guide them through identifying incidents, understanding their own rights, creating a safe space for everyone in the workplace and instituting a zero-tolerance policy.

After meeting some resistance, WAN-IFRA decided to mandatorily couple training sessions on sexual harassment with other programs, and constantly make the case for why a gender-diverse and safe work environment is good for business. The typical reaction they got from both men and women was “no, this doesn’t happen here”. In fact, as ambitious professionals, many women in the MENA region often distance themselves from these issues because they want to be dealt with based only on their performance.  Speaking up against sexual misconduct is often seen as opening up “a can of worms”, since taking a stance against colleagues is only the first step of many. As survivors start thinking of incidents involving their sources, questions are raised as to “how the profession is constructed and its relationship to authority and how people come into the positions that they’re in”. Farag continues “it’s a very murky territory and it has ramifications related to your promotion, to your standing, your social standing, to your standing with your family”.

Despite the many successes of these policies, the panelists are very aware that the problem in the problems in the workplace are a mere reflection of what happens in the streets, and that women from lower socioeconomic classes are disproportionately affected. Farag recalls a conversation she had with a colleague, who told her: “you have no idea what it’s like”, “for me to have to think about what I’m wearing, to have to go out onto the street and think how men are looking at me, to get onto public transportation and worry about who’s sitting next to me and then get off and walk to the office. By the time I get to the office, I cannot stand myself”. Fellow panelist Lina Attalah concludes that even though #MeToo was a “revolution of telling”, “not all difficult emotions can be written into words”. Ultimately, the only way to really change things will involve a larger cultural shift.