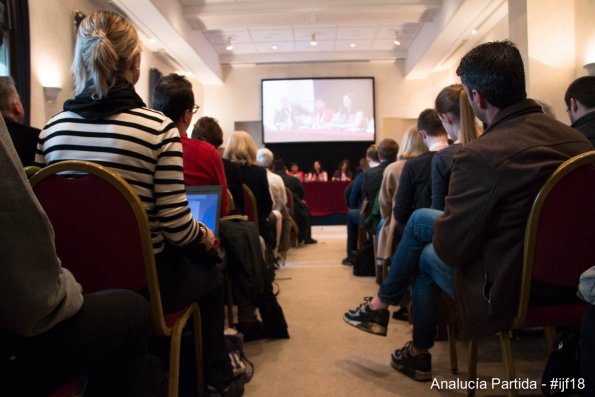 A moral compass in journalism has always been an issue. However, it has become even a bigger problem lately, and the reason behind it is the creation of a new world where media shares the information space with various platforms. In this way, what moral behaviour and what responsibilities to public information should both media and platforms have? Those are the questions that were discussed at the panel “Help define the moral imperatives that should be guiding media and platforms’ decisions” as part of the International Journalism Festival in Perugia.

When it comes to the moral rules of the profession, common humanitarian values should be embraced according to Maria Ressa, CEO and executive editor Rappler. The golden rule is to do to others as you would have them do to you. Understanding their big responsibility, journalists used to voluntarily handcuff themselves so that every opinion was being delivered and paid attention to. Today this mission appears to be missing from current journalism and not suitable for the new world of platforms. Nowadays people who create technologies and platforms don’t realize their responsibility in regards to information, thus lowering its ethical standards. Ressa compares the current situation to a house where everyone is shooting at each other out and in the end, the one with more people on his side wins and rules the shooting. This leads to manipulation which we need to anticipate. Answering to Jeff Jarvis’ question, Maria defined manipulation as using different technologies to create «an artificial consensus».

Indira Lakshmanan also shared her thoughts on the ethical basis of journalism and platforms. She started her speech by telling the story about her and Maria Ressa running the streets of Asia together as correspondents twenty years before. She noted that it was a completely different time. Journalists were gatekeepers and they could observe what was happening in the world and choose what to tell to their consumers. However, she recognized that what she was working on for some time was not even close to being as important as what Mark Zuckerberg did. The creation of Facebook changed journalism forever. Platforms now have a responsibility for the content they post and they’re aware of it. “Yesterday Mark Zuckerberg in his second day of Testimony on Capitol Hill was asked «Are you a publisher? » and he said «Well congressman, if what your question is ‘Do we have a responsibility for the content that is on our platform?’, then yes, we do have a responsibility»”, – Indira said.

Some of the main functions of journalism are to connect people, to educate and inform them. And the moral rule is to do it all with transparency as a way of building trust. At the same time, the main function of the platform is to connect people, to create an open space, which potentially causes many problems such as “misinformation, the spread of extremist content, the spread of hate speech, the incredible harassment to which particularly women and minorities are subject online”.  And it is a moral responsibility to fight against all of it, Indira claims.

The following speaker Janine Gibson, an editor-in-chief of BuzzFeed UK, gets back to that time when online platforms didn’t exist. She remembered how journalists and technologists naively “wanted to change the world and were genuinely excited and scared about the power that we had”. They were creating a journalism based on the main principles: educating, informing, spreading the best information they could find. There also were many moderators that were checking all the comments to make sure there was no extremism. Subsequently, platforms were created and journalists let them set the rules. However, journalists were too liberal parents, Janine claims:”we did everything they wanted us to do and we are still not rewarded for it”. Now it’s time to become more authoritarian and to set the regulations for platforms. She believes that only thanks to journalists platforms started actually taking the responsibility for the content they have. “Because journalists wrote stories, people got really angry, other journalists amplified stories, people got angrier, people use concrete examples to show us what was happening and that has forced the change”, – she said.

“I think we have a responsibility in journalism that also platforms have to convene communities into civil informed and productive conversation”, – Jeff Jarvis added.

Raju Narisetti, a CEO in Gizmodo Media Group, pointed out an interesting fact “The irony of talking about all this at the conference where the top three sponsors are Facebook, Google and Amazon is interesting”. Raju thinks that it’s not possible to outsource a moral responsibility. He said: “The idea that we can point fingers and say that you have a moral responsibility to do something is good, but can’t be outsourced. So the reason I think Facebook got into its recent issues is because it outsourced the responsibility to Cambridge Analytica and others to do something good or not bad with their data. “He also looked at the issue from the other side: “The notion we treat those who collect data as fiduciary owners of data is a good philosophical and a moral framework”.

Raju believes that in terms of spreading the information platforms are very useful and important: “I guarantee you: more people read about Cambridge Analytica on Facebook and Twitter then if they were reading those two publications that actually published it. I think in that sense its good.”