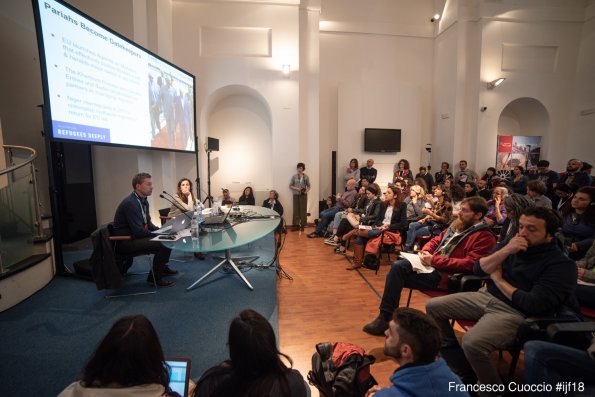 Inspired by a long piece titled “The central Mediterranean: European priorities, Libyan realities”, written in October 2017 by Refugees Deeply’s senior editor Daniel Howden, the homonym panel offered an in-depth insight on what’s happening in the heart of the Mediterranean and delved into the challenges that rescue organizations and activists face to save lives in the Mediterranean, shedding light on the costs of the EU migrant deal with Libya.

Howden and Francesca Mannocchi, an Italian freelance journalist, discussed Libya’s current situation and the status-quo of the refugee “crisis” beyond the media coverage. In recent years, Europe has made tremendous efforts to stop sea-crossing of migrants, especially flows of people coming from countries like Libya and Turkey with the help of deals established with the respective governments. The new agenda around migration has been branded by European policymakers as a humanitarian policy aiming to save lives and protects humans from trafficking but it’s in reality, as Howden argued, a policy aimed to stopping migration and intercepting the activities of humanitarian organizations in the Mediterranean sea.

In a presentation that he called “Xenophobia dressed as Humanitarianism: EU migration policy and Libya” Howden explained the shift of policy from rescuing at sea, with operations like Mare Nostrum – which was abandoned beacuse of a lack of EU-wide support to stopping migrants flows to Europe – and missions like Sophia, Triton and Themis marked by a withdraw from areas closer to Libyan coasts. During the presentation, facts about the Italian deals with the Libyan militia were outlined.

Howden also drew a comparison between European policy on Libya under Muammar al-Gaddafi regime and today’s, explaining how Europe has started to adapt its policies to the changes in regime and how European governments have perpetrated the idea that the reality in Libya is very complex while encouraging journalists not to travel there to report from the field.

Then Mannocchi, who recently returned from a reporting trip to Libya, told the audience more about the Libyan realities. Mannocchi navigated through a series of photographs – shot by freelance photographer Alessio Romenzi – to tell us what she saw in Libya and more specifically in migrants’ detention centres in Tripoli.

Mannocchi has been working for years on issues related to migration in the Mediterranean sea and tried using her knowledge and expertise to inform the audience about the political situation in Libya today and, most importantly, the challenges of a divided Libyan society. The work of journalists in Libya is a very hard and a highly risky task because of the complexity of a country dominated by war and trafficking.

In addition to fixers who know the language and the context, foreign journalists need authorizations and must follow the regulations and instructions imposed by the Libyan authorities. Mannocchi told the audience that journalists travelling to Libya for coverage have to report daily on what they do, who they spoke to and what they published in their respective media outlets. Mannocchi also spoke about her experience in getting permissions to get into detention centres in Libya, and talking about the complexity and length of the procedure for journalists.

She talked about a detention centre she visited, suggesting these centres undergo a preparation process to manipulate the visual impact of the visit to show journalists what should be broadcasted on media outlets. The assignation of interview partners makes the reporting even more complicated and challenging.

Mannocchi added that the situation in the unofficial detention centres is unknown and no one – even the most courageous and brave journalists – wouldn’t be able to enter there.

Howden joined back in addressing the issue of a CNN report on slavery and slaves auctions in the street of Libya that last year rocked international public opinion and sparked an outrageous moral outcry worldwide – pointing out that what was depicted in these reports was slightly different from the reality in Libya.

He explained how he saw the situation as a kidnapping-and-ransom system coupled with torture in many cases to pressure the victims’ families for cash exchanges.

“I think that the slavery headlines just shows us that there are certain categories of moral crimes which we are much more directly and more easily attracted to, Howden said “There are certain things which resonate with a broader audience and meet the kind of narratives that make people stand up and pay attention.”

The panellists also discussed the international coverage of Libya and how it focuses mainly on reporting on migration and trafficking. Howden said that, by focusing only on these aspects, international news outlets contribute to a weak understanding of the Libyan context as a whole complete picture.