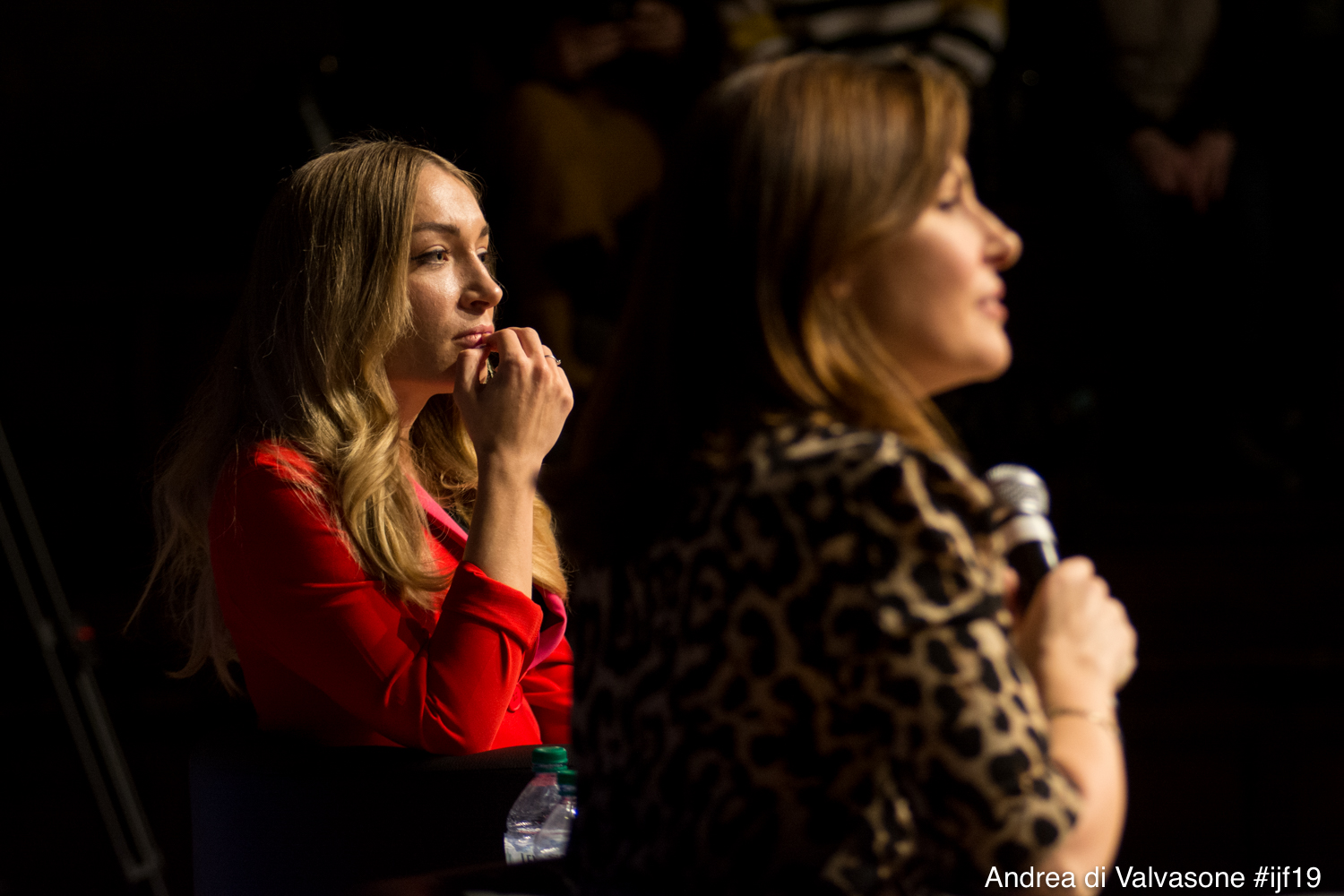 “Pope no more”, “We bite back”, “Bare breasts are our weapon”. These slogans, painted on the topless bodies of the members of the Femen movement, have made headlines over and over, thus taking their activism beyond the national Ukrainian scene. Originally founded by Anna Hutsol in 2008, since 2013 the activist group has been led by Inna Shevchenko, who shared her story in the Sala dei Notari at the thirteenth edition of the International Journalism Festival in Perugia.

Being part of the first generation after the Orange Revolution, Shevchenko felt young women had a choice their mothers didn’t have: refusing to be silenced and finally speak up against the patriarchy, sexism, and overall inequality they were subjected to. Her activism stemmed from the need to take ownership of her own body, to steal women’s bodies from the sexist narrative that kept oversexualising them. However, women had been voiceless for centuries, so “speaking up” was not just possible without an audience listening. Therefore, what seemed the most logical choice was to use their bodies – which were the center of attention – to convey their message. Willing to provoke debate, they took off their shirts and painted slogans all over their chests. What they were saying was: “now my body will no longer be sexual whenever you want it, but now it will be political whenever I decide it to be political”, as explained by Shevchenko.

Their strategy worked and the reactions were massive and various. As told by the activist, Femen received a wide range of responses from “go back to the kitchen!”, to arrests, criminal and administrative charges, and strong criticism for their “obscenity”.  “That was, once again, this kind of a revelation that indeed we did something right”, she states, and continues: “When ever before a woman’s naked body was disturbing so many men in this country? We understood that the clincher was that we now placed the woman’s body in the political context and these men saw that now this body is no longer there to please them”. Their strategy was revolutionary: they took back their own bodies, which had always been the centre of their oppression and made it the center of their self liberation.

This came, however, at a price: due to her activism, Inna Shevchenko has been arrested multiple times, which cost her job at the Kiev Mayor’s press office and, most importantly, it led to her being kidnapped and tortured by Belarus KGB just to prevent Femen from fighting for women’s rights. Now in exile in Paris, Shevchenko keeps a positive attitude and admits that without all that happened, the movement wouldn’t have grown as it has, it wouldn’t have gone international and reached countries like the UK or Argentina.

Moreover, the protests didn’t only shed a light on the condition of women’s rights, but on dictatorial regimes, which became the centre of international attention. Shevchenko refers, in particular, to Ukraine, Russia, and Belarus, whose populations suffer under the burden of the lack of basic human rights, such as freedom of conscience, expression, and manifestation. This is where her drive to activism came from, that is from the suffocating feeling which she is not afraid to share because, as she says: “I think that it can be useful for other people who want to engage and who are engaging right now”. Although she has been insulted, tortured, and exiled from her own country, Shevchenko won’t just stop fighting for what she believes in. She wants to inspire people to change and improve the world they live in and, looking at the political landscape in Europe (but not only), she feels that her job is not done.

Talking about Europe, Serra shifts the attention to Italy and its current political and social situation, mentioning that, as regards the global gender gap, Italy is at the 70th position out of 150, according to the World Economic Forum. Shevchenko is particularly interested in the country, especially when it comes to the Vatican and religious women’s rights, but also in events like the World Congress of Families. Actually, she’s worried and she feels compelled to share her experience and advice to warn people.

Looking at the rise of the far right in Europe and comparing Italy’s and Ukraine’s politics, the activist told the public: “When people so easily go and vote for the right wing, for those who represent exactly similar vision of the world as those dictators in Eastern Europe and do it so easily, I just want to go and tell them how it is there, so that you can really understand that sometimes one vote or one kind of feeling of you know being disappointed with the current affairs of the world and willing to kind of punish the establishment by electing those who represent even worse conditions for your future. I mean it can really affect everybody.”

Her aim is spreading her message and so it just comes natural asking: what’s next? What can be done? Although Shevchenko prefers not to share her future plans – “We would never be able to attack Berlusconi if he would know that we’re going to attack him, right?”, she laughs – she truly wants to keep fighting the women’s revolution, which “is the longest of all human revolutions”. Moreover, Femen is also publishing a book in France which celebrates women from all backgrounds, religious women included, notwithstanding her strong criticism of the Church because of its inherent sexism. Last but definitely not least, Shevchenko is thinking of how to expand their movement from an international to a global level, embracing a wider range of issues while helping and inspiring more and more women. After all, concludes the activist: “the tactic is serving numerous different causes” and it’s still widely used, let’s just think of last week’s protest against Brexit.