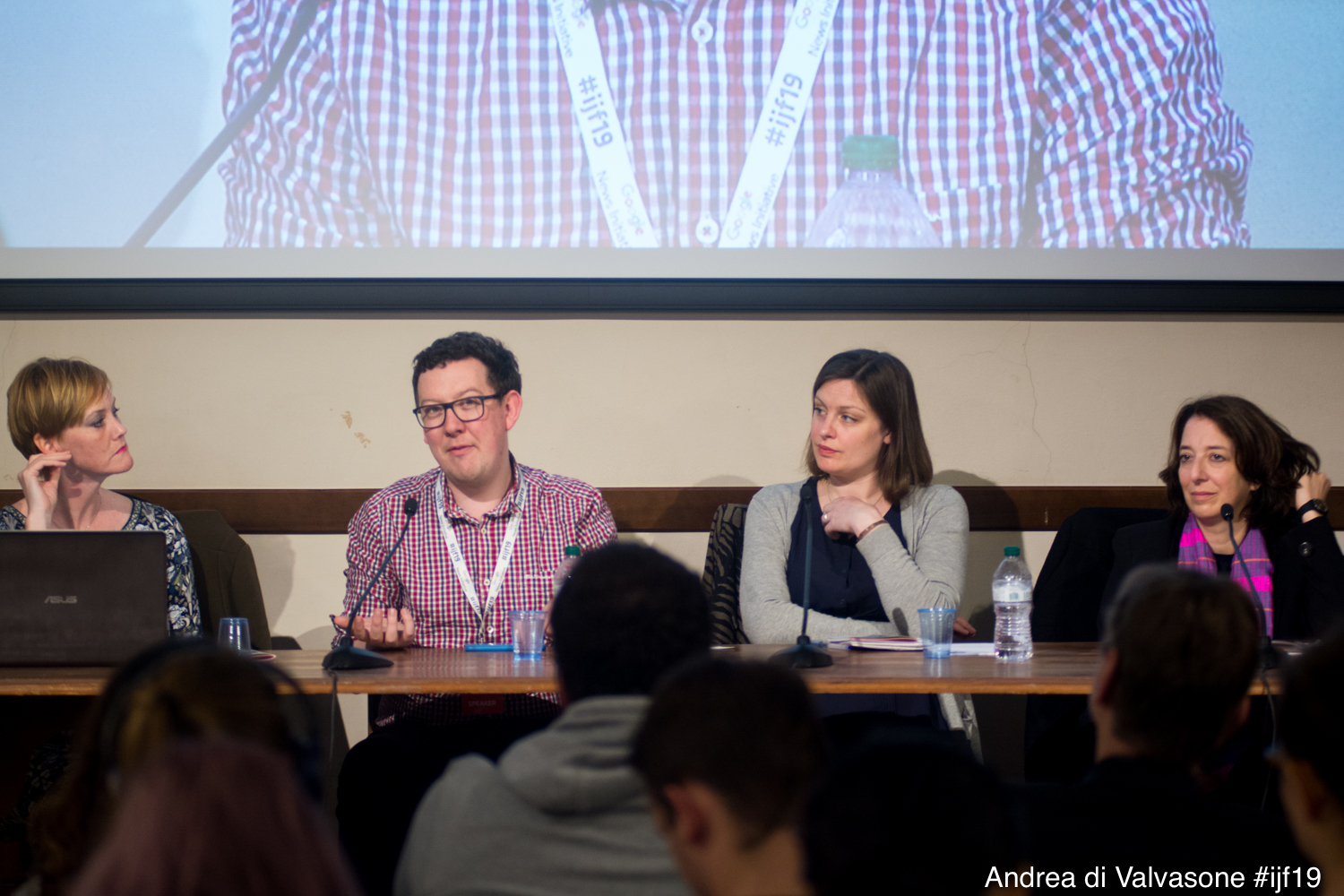 As an old profession began to brand itself with a new name, that of ‘investigative journalist’, soon after it became necessary to create a university program to train students and give them those skills that are supposedly needed for such a job.

City and Columbia University, both participating at “From zero to hero: can investigative journalism be taught?”, a panel discussion held at the International Journalism Festival, came on stage presenting themselves as the institutions that would provide students with the solution to such a problem. On one side, Anya Schiffrin and Heather Brooke, from Columbia and City respectively, represented the academic side of the debate whilst, on the other, Pulitzer prize-winning journalist James Ball and Alice Ross from Unearthed Greenpeace came to share their experiences as former alumni of the investigative journalism course at City.

The discussion began with a clear and in-depth introduction carried out by Brooke to the MA in Investigative Journalism at City University, which enjoys a worldwide reputation for its intensive nine-months training and the excellent skillset it has proved to equip its students with, through its practical as well as the theoretical style of teaching. The extremely competitive program, as a matter of fact, borrowing from Brooke’s words, prepares students that already possess “personality qualities” suited to such a profession, i.e. tenacity, obsessive desire for truth, desire to get to the bottom of things and, last but not least, curiosity, to enter the job industry in a smoother way by providing them with practical skills across all media that, according to Brooke, can indeed be taught. Among the many, she mentioned: research methods, background profiling by using open source, company reports, and group investigative projects.

Anya Schiffrin, with her long experience as a researcher in the field of global muckrakers, journalism training, and as director of the Technology, Media, and Communications (TMaC) specialization at Columbia University’s School of International and Public Affairs (SIPA), agrees with Brooke on the idea that indeed not all the skills needed to become an investigative journalist can be taught. However, a master program can equip students, particularly those from countries in the Global South wanting to embark themselves on such a career with the support network and the opportunity to practice investigative journalism that they are lacking back home.

All panelists seemed to agree on the fact that nowadays newsrooms expect journalists to be able to work under pressure and at an incredible speed from the very beginning and fail to provide students with necessary training, hence the need to previously attend a course that seems to be able to provide with “secret-tricks on how to carry out an investigation” such as how to deal with problematic editors or lawyers.

When the microphone was handed to the alumni, however, the optimistic tone slightly faded away and a much more nuanced perspective on the importance of a master degree in investigative journalism emerged. “Getting the story is half of it, getting it published is the other half and the first half is completely pointless if you don’t manage the second”, stated James Ball whilst expressing his appreciation for the access he enjoyed to the “real world wisdom as a young student” over the course of his MA at City.

After James, Alice Ross was introduced by the previous two speakers as the only investigative journalist among the participants on the panel but as soon as she took the floor, her first remark was “ I actually don’t use the title ‘investigative journalist’, I don’t like it very much because I feel that the distinction between investigative reporter and reporter is somehow an artificial one. Basically, the only commodity that we have that normal reporters don’t have is the luxury of time and I feel like it creates quite an unhealthy distinction.” Ross went on asserting that although the program gave her contacts, confidence, and a brand on her CV that would open doors which wouldn’t normally be open, to this day she cannot avoid feeling concerned about the financially difficult access to the course and the professionalization of the industry which came hand in hand.

“The real skills of investigative journalism, I felt you learned them in newsrooms actually, from working alongside proper operators”, she continues, “the people who’d been doing the sort of shoe-leather reporting for decades and who had never been anywhere near fancy pants course”. “I really worry that when you teach a course that is that expensive you are limiting the access to investigative journalism and you create a sort of impression that you’re professionalizing a part of an industry  whose key competencies cannot really be taught.”

Heather Brooke, for her part, asserted that the MA at City attempts to replicate the education that used to take place in the old newsrooms in that now “those that can teach the younger staff, the most are the biggest drain on the payroll and so they get cut loose”. She went on explaining that the program, therefore, aims at condensing the training that used to be provided over the course of two years in a newsroom into 3 months, as a sort of fast-track apprenticeship.

James Ball, however, rightly pointed out that the process that was being illustrated exemplified the unfair shift of the burden of training from the employer to the employee with terrible consequences on the diversity and plurality in the media sector.

Furthermore, besides the financial difficulties both alumni encountered whilst trying to pay back the loan for their MA, James and Alice shared the uncomfortable feeling of having bought access to the industry; in such a competitive job sector, James stated, getting an MA provided them with an edge.

Later on, in the panel discussion, Anya introduced the issue related to the shortage of appetite for investigative journalism as opposed to the abundant supply particularly in the Global South, hence the role played by a Master level course as a platform for journalists to get into an otherwise difficult to access industry.

Alice Ross, on her side, reminded the audience that also another effective way to learn the skills is simply by looking at what other journalists have done and through a process of reverse engineering try and follow other people’s investigations such in occasions like the IJF as models.

During the Q&A, in conclusion, the discussion moved to the topic of journalism as a business and the role of brands as a broad introduction to international networks between journalists from all over the world.