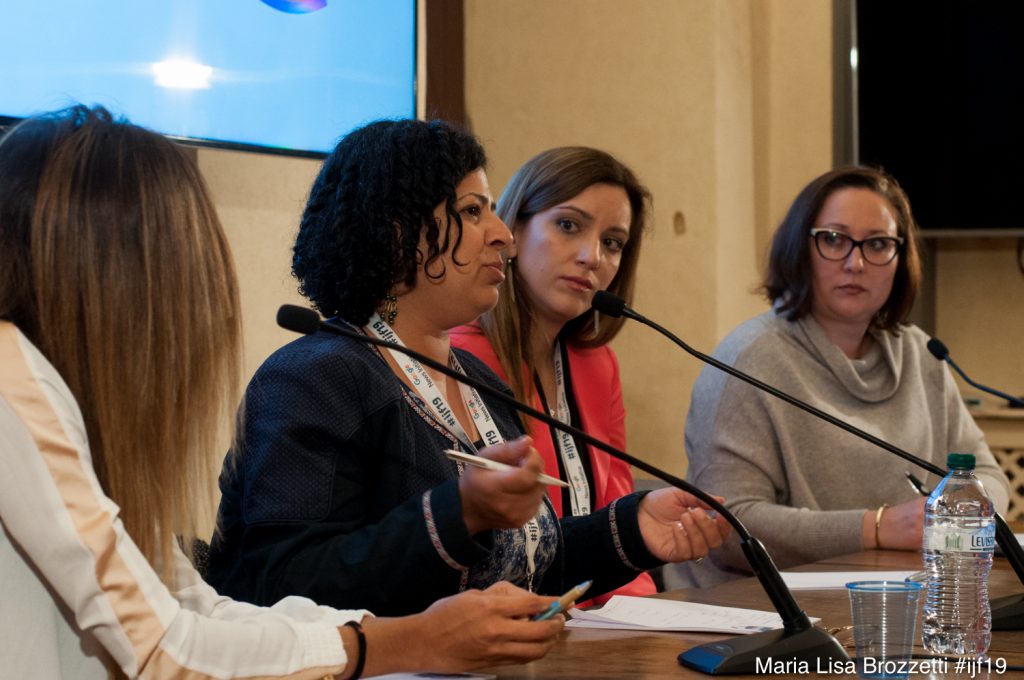 Women journalists are facing unprecedented threats to their safety both on and offline. According to Courtney Radsch from the Committee to Protect Journalists or CPJ, besides the staggering increase in online harassment, more and more female journalists are being imprisoned, and 11 died in the last two years. Referring to her co-panelists at the event “Improving the safety of women journalists both on and offline”, she explains that “when journalists like my colleagues here are threatened, or harassed, or attacked, there’s a sexual violence dimension to it that a lot of male colleagues don’t have”.

Ekaterina Kotrikadze, deputy editor-in-chief at RTVI, has been at the center of sexual harassment controversy in Russia. Now based in New York, the journalist shared the story of when she was attacked by member of the Russian Parliament Leonid Slutsky about seven years before she finally decided to tell her story on air in February 2018. During an official interview, Mr. Slutsky allegedly pushed her against a wall, kissed her and grabbed her in his office at the Duma, in broad daylight. “In my world, in the world of the post-soviet space, these kind of things are not to be discussed”, she says when talking about why she didn’t report him to her superiors. “You, a woman, is always a problem. You, a woman, is always the one who is responsible for what happens. And this thought, I mean, I don’t know how it comes to you”, she continues, “it’s just inside of you, you grow up with this”.

Keeping her story secret took a toll on Kotrikadze. “From a professional point of view or from, you know, a personal point of view you become different when you are attacked”. Following the incident, she describes always planning her interview set-up in advance, making sure she has a cameraman with her at all times and conducting one-on-one sit-downs in crowded spaces. After the #MeToo movement broke taboos in the United States, she found the courage to speak out, despite knowing that her story was going to be met with derision and harassment. “It was, you know, a breaking news for me that you can talk about that”, she remembers, adding “This is a new world in which you can speak up and in which you understand that you are not an issue, and if you were harassed it’s not your fault and not your responsibility.” With the support of her husband and editor, she broke the first story publicly accusing a man of sexual misconduct in the history of modern Russia, and she was later joined by several other women who were also sexually assaulted by Mr. Slutzki.

In the case of ESPN reporter Julieth Gonzalez Theran, her sexual attack was very public, live-streamed for the whole world to see. Many have watched this video: a journalist reporting from the World Cup, grabbed and kissed on air by a stranger, who still managed to maintain her composure and finish the piece. Besides telling her story, these images exemplify how endemic sexual harassment is to women covering sports. “I have to say, this World Cup case was a turning point for my career and for my life”, she explains. Being exposed to social media opened her eyes as to the lengths that people can go through to tolerate and justify the behaviour of the attacker. She was called a drama queen, told she was exaggerating the problem, but most importantly she was discouraged by colleagues in her own newsroom to keep working as a sports reporter in the field, reinforcing her victimhood status. Fortunately, her superiors stood by her and provided her with protective measures before and after the incident.

In Egypt, it is a whole different story. Sexual harassment is never prioritized neither by newsrooms nor by authorities. “What? you’re gonna talk about sexual harassment?” asks Lina El Wardani from Ahram Online, mimicking the responses she received when raising the issue. “We have terrorism, you’re gonna talk about sexual harassment? We have elections, we have like bigger things, we have poverty (…) we’re building our country”. Sexual harassment is a daily experience for women in Egypt, in the streets, in the newsroom, when talking to sources. She and many others were asked whether they were single by their superiors, or attacked by a source and then made to feel crazy for refusing the advances. “How come you do not appreciate? but I am giving you the privilege of hitting on you!”.

She continues “I think the only time when we felt like we owned the streets was the time of the revolution”, describing the 18 days that lead to the fall of Mubarak. Then the sexual harassment started again. Before the #MeToo movement, the Egyptian hashtag First Time I was Harrassed spread across the Arab world on social media. Then again, women used #انا_أيضا, the Arab equivalent of #MeToo, to share their testimony. This time, however, they received a lot of backlash and were accused of tarnishing the reputation of the left and the revolution. “Is this the most important thing?” they were asked. “No, we have a bigger fight, you know, we’re fighting for the future of Egypt”. Since journalists in Egypt face state-sponsored shut-downs and strict authoritative control, sexual harassment is never considered a real risk. However, El Wardani also sees a big cultural shift in the new generation, who is not willing to let things slide. Lists of men who harass women have been circulating on social media and, for the first time, some of them are intimidated.

Faced with so many challenges, it is hard for women journalists in Egypt and all over the world to discuss the problem of safety without restricting their own opportunities and spaces. However, the CPJ has developed a set of guides that can be adopted both by individual journalists and newsrooms to tackle the main risks. “I think there’s a thought that, you know, risk assessments only need to done when you’re about to go into a war zone”, says Radsch adding that in reality they can be useful tools to foster a culture of safety for journalists in any situation. She also suggested that separating business and personal profiles on social networks and practicing “social media hygiene”, meaning regularly checking if your private information such as phone number and address are available online, can be important ways to prevent unfortunate things from happening.

When it comes to physical attacks, Lina El Wardani suggests that one has to be firm in stopping them and then scandalizing the perpetrator everywhere. Ekaterina Kotrikadze also talked about how she asks people in her personal life to filter messages on social media for her so that she can be available for feedback to her fans without exposing herself to the harmful mental health consequences that come with online harassment. She also said that her newsroom has set up a security system that allows her to be locked inside and for everyone coming into the office to be checked before interacting with the staff. “Definitely report things, document them, you need to, whether it’s online or offline” concludes Radsch, before listing the organizations that provide support to journalists victims of sexual harassment. “Report it to the Committee to Protect Journalists, there’s Reporters Without Borders, and the International Women’s Media Foundation”.