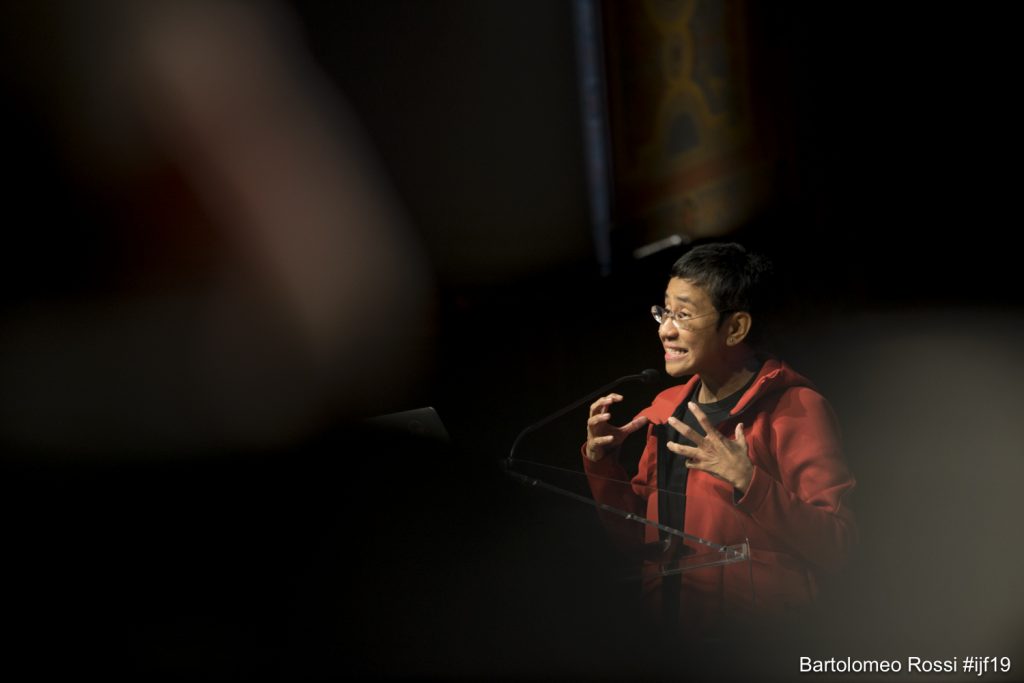 Arrested twice in just over a month and with 11 investigations against her news organization, Maria Ressa, CEO and executive editor of social news network Rappler, remains resilient in the war against disinformation in the Philippines.

Since the beginning of the country’s ongoing drug war in July 2016, Rappler has faced a series of online attacks in response to its coverage questioning violent extrajudicial killings. Speaking at IJF19 on Thursday afternoon, Ressa explains how it all began in the run-up to the 2016 presidential campaign: “This propaganda machine on social media began to attack anyone who questioned the killings and the drug war.”

“The campaign pages of the Duterte campaign and the Marcos campaign – Bongbong Marcos, the son of Ferdinand Marcos, ran for vice president – those become the areas where these lies become viral.” Thus, via an army of fake social media accounts, the Philippine government has for nearly three years spread a series of disinformation and lies against Rappler and other outlets in an attempt to silence those speaking out against corruption.

The spread of disinformation is having a real impact upon Rappler and the work of others fighting to safeguard democracy. “The pro-Duterte information clusters dwarf the people trying to get to the facts… These pro-Duterte-Marcos communities share and spread each other’s content within a large coordinated network. They dwarf the newsgroups because the newsgroups are not sharing or working together,” Ressa explains.

“With so much toxic sludge, with so much disinformation, so many lies, our societies are being re-shaped. We’re new people .”

The actions against the media not only spread lies, but fear. “When you come under attack, and it’s your government attacking you, it scares everyone, including people who support you – it’s much more muted support .”

And the effects become even more tangible. Philippine senator Leila de Lima was arrested last year on the basis of drug charges filed against her by the Department of Justice. She was also a victim of information warfare: “#ArrestLeiladeLima trended three weeks before she was arrested. Social media is the AstroTurf, it’s the fertilizer, and then government action comes on top and amplifies it,” says Ressa. An appeal against the validity of de Lima’s charges was rejected.

Ressa has herself been victim to a series of personal attacks, including online threats of sexual violence and death. These have not only come from fake accounts but have trickled down to inspire threats from real people.

“This information warfare, the propaganda, has an impact on real people, and on the values of our societies, and it scares me, the medium-term impact,” Ressa expresses.

But Ressa and her team at Rappler refuse to give in, continuing to investigate and uncover corruption within President Duterte’s government, maintaining a database of the accounts spreading disinformation so that journalists can identify those attempting to suppress them.

“I think the reason I keep getting attention – special attention from the government – is because we need to talk about what’s going on, and I refuse to be silenced .”

Ressa has become an icon for press freedom around the world. In 2018 she was awarded the Gwen Ifill Press Freedom Award by the Committee to Protect Journalists, as well as the Knight International Journalism Award by the International Center for Journalists. Furthermore, she was honoured by Time magazine as one of four ‘Guardians’ celebrated as Person of the Year.

So why do Ressa and her team at Rappler continue to risk their livelihoods in pursuit of the truth? For Ressa, little could sway her drive to fight back, and she remains hopeful for the future. “I have to go back [to the Philippines]. I have a fantastic team that is doing great investigative journalism, and I think if anything you have to chronicle the dissent. So just the threat of intimidation isn’t enough .”

“There have to be actions because we will look back in time and there hopefully will be people who will be held accountable for every one of these points .”

From the charges against her, Ressa currently faces maximum jail time of around half a century. But she remains optimistic about her trial: “I’m optimistic that there are men and women inside the Philippine judiciary who will stand up to power, and hopefully throw this out. My first day in court there are three judges in the court of tax appeals, and so I’m hoping that that is actually going to work in our favour .”

“This is a dangerous time to be a journalist in many parts of the world, and I think that while we have the norms that we have now, we need to fight to the nail that it doesn’t get rolled back any further and that any push to push us back towards a dictatorship or authoritarian rule gets challenged. So much has happened without any challenge, and I think that’s been enabled by social media; by technology. We real people, we need to stand up and fight back .”

Duterte’s government is just one example of a state using information warfare to attack those trying to fight against corruption and safeguard democracy. “What we’re seeing is a global dictators’ playbook, and social media is crucial to it,” Ressa explains. Another clear example is President Trump, whose attacks against the US media and his claims of ‘fake news’ have been relentless since the beginning of his presidency in 2016.

No nation stands alone in its fight for the truth, and Ressa calls for journalists to come together in the fight against disinformation. “When your people believe it, or when they don’t know what to believe, then you are vulnerable. I’m learning this right now, and part of the reason I speak all the time is that we need to build communities that are resilient in this, and as journalists in a global landscape… we need to come together.