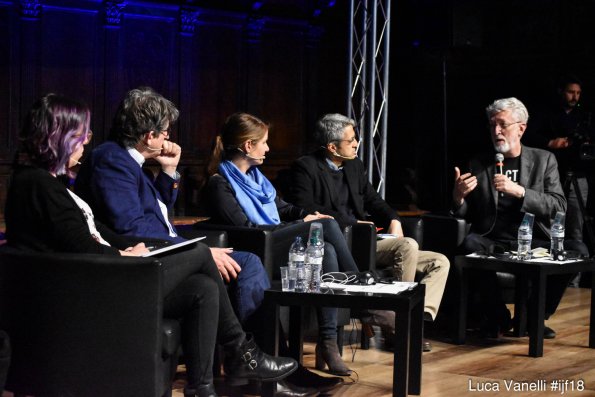 This week Mark Zuckerberg testified at the United States Congress about the Cambridge Analytica data breach that exposed the personal information of up to 87 million people.

Is it time to panic?

As we enter an age where technology interacts with nearly every part of our lives and yet remains vulnerable to data breaches, bias and hacks, the media must do a bit of soul searching. Does journalism need to sound the alarm at the potential for the artificial intelligence apocalypse? Or do reporters need to remind society of the potential of these technologies and the inevitable stumbling blocks that come with progress? The panel “Moral panic over technology: is it all that bad?” attempted to answer this question.

Moral panic, as moderator and associate professor and director of the Tow-Knight Center for Entrepreneurial Journalism at CUNY Jeff Jarvis explained (quoting Ashely Crossman), is a “widespread fear, often an irrational one, that someone or something is a threat to the values, safety and interests of a community or society at large. Typically a moral panic is perpetuated by news media, fueled by politicians, and often results in the passage of new laws or policies that target the source of panic. In this way, moral panic can foster increased social control.”

Jillian York, director for international freedom of expression at the Electronic Frontier Foundation, said the problem with the conversation around tech companies is that “we’re in the era of binary thinking.”

“Moral panic is coming out of this idea that we either have to embrace these technologies and these platforms or we have to reject them entirely,” York said. She found the “delete Facebook” movement as an example of this overly simplistic way of thinking: “I think we need to be looking at the middle ground, the third way.”

Not to mention the lack of understanding of exactly how tech platforms work, Alan Rusbridger, former editor-in-chief of the Guardian, pointed out. This was particularly showcased in the recent questioning of Facebook CEO Mark Zuckerberg by the US Congress. Regulating tech companies before truly understanding their platforms could be harmful in the long run, he argued.

“The danger here is we rush to some kind of solution based on zero evidence and based on a situation that we’re all fumbling to understand in some way, including the people who are building this stuff,” he said. (5:55)

Madhav Chinnappa, director of strategic relations at Google, agreed. “Think these [problems] through thoughtfully,” he said. “Because you don’t want to get into unintended consequences and overreaching and binary thinking.”

But Tanit Koch, former editor-in-chief of BILD, pointed out that different industries call for different types of reaction. While the tech conversation is dominated by calls for regulating social media, she said she’s more concerned about automation and artificial intelligence that could significantly disrupt the labor markets.

“AI will not just threaten minimum wage jobs, but lawyers, accountants, radiologists and I don’t see that this challenge is on people’s minds,” she said.

While the panel largely centered around moral panic and technology in western countries, given the panelists were all from the US, UK or Germany, audience member and festival speaker Bobby Ghosh voiced his concern about the role of Whatsaapp in spreading harmful and hateful ideas across the closed communication on the platform.

So how could journalism productively cover and contribute to the moral re-orientation of technology companies?

The panel had a variety of answers: continue covering tech companies and the issues they face, while remembering that they have a monopoly over information in many countries and have corporate interests that govern the use of our data and communications. While each tech company will be different in how exactly it navigates the moral and ethical questions the arise at scale, ultimately they are largely comprised of engineers who have a very specific way of looking at the world. Bringing more journalists, thinkers, and average citizens into the technology building process can help expand their view to the larger problems that could arise when rolling out this tech.

So should we panic?

“My argument in the end is it is still too early to panic,” said Jarvis. “We are still making this thing of the Internet, we don’t know what it is yet, we still see the future in the analog of the past.”

“In the end, the question is do we have faith in our fellow men and women that they will figure this out?” he added. “I still do.”