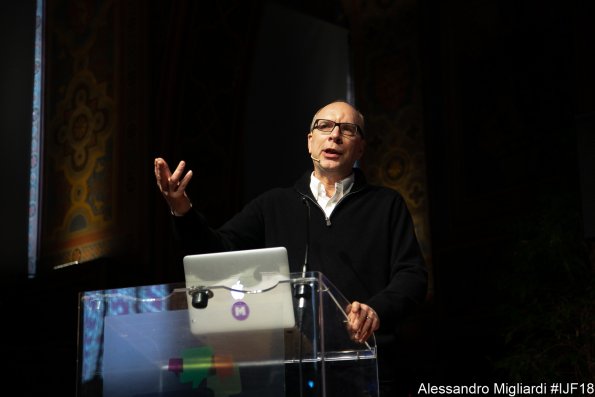 The recent rise and success of populisms all over the world shows an indisputable lack of trust in institutions: be it government or any other kind of authority, people are looking for voices that speak for and feel close to them. Unfortunately, it seems that journalism was taken out of the equation in favour of sensational and emotion-driven news, thus preferring flattery to reality.

But how can we, as journalists, build that trust again? Is it possible to combine high standards of verification with people’s trust? A definitive answer is really difficult to give, but it’s crucial to discuss this matter, as it was done during the talk “Optimizing Journalism for Trust”, led by Jay Rosen during the International Journalism Festival.

Rosen is an associate professor at the Arthur L. Carter Journalism Institute of New York University and he’s to be considered, according to Matthew Ingram – moderator of the panel and chief digital writer at Columbia Journalism Review – “one of the leading Journalism academics in the US but more than that he’s been the bearer for a bunch of journalistic concepts or new media concepts that are effectively shaping the world that we see around us.”

Rosen kicked off his keynote speech with a quote by political theorist Sheldon Wolin, saying “When there is a vision, things appear in their corrected fullness”, to explain what he meant by “optimizing for trust”. As journalism appears to have lost the privilege of credibility, it is necessary for journalists and media professionals to have a vision, or direction, to follow in order for them to achieve support and trust from the audience: good practice and respecting the rules are not just enough.

But what does trust mean in this context? Should the reader be pleased then in order for him or her to appreciate and value the content journalists offer?

Rosen warned the public exactly what he meant in this respect: it is crucial to respect the audience, to take their feedback into consideration, but journalism shouldn’t surrender to pleasing the public. “A kind of trust can be built that way, on resentment news, on transgression, on confirmation bias,” he said but it’s not what news outlets should strive for.

“Trump in a way does that with his Twitter feed and there’s polling to indicate that he is more trusted as a source of information than the news media is by Republicans in the United States,” Rosen added “[but] if trust by itself is a poor metric, our problem becomes how to combine high standards of verification with optimizing the news organization for trust”.

Journalists, therefore, need to build quality and trust not just to stay in business, but to stay in journalism. There is the need to improve the services they offer to members of the public and the relationship they have with them. Transparency is the key: make people know about the processes, let them see the work inside the newsrooms and let them participate through memberships.

Rosen then provided attendees with a set of guidelines to optimize journalism in order to gain trust from readers and viewers:

In Rosen’s words: “When [the process of] educating people with your journalism is [merged with] educating them about journalism and how it’s done – when reporters share their learning curve, even as readers, they share their expertise, when the people who value the work choose to support it financially and want it to spread to the public it was made for. When you not only asked supporters for money but explain how you use their money, when radical transparency combines with genuine diversity to make something better than objectivity – when all those things start happening together and form their own newsroom culture, then we’re beginning to optimize for trust.”

To help journalism achieve this goal, in March 2017 Rosen started collaborating with De Correspondent in the US, thus promoting a model based on trusted membership, where money equals quality, research, and high standards of verification to give the reader reliable and trustworthy information.