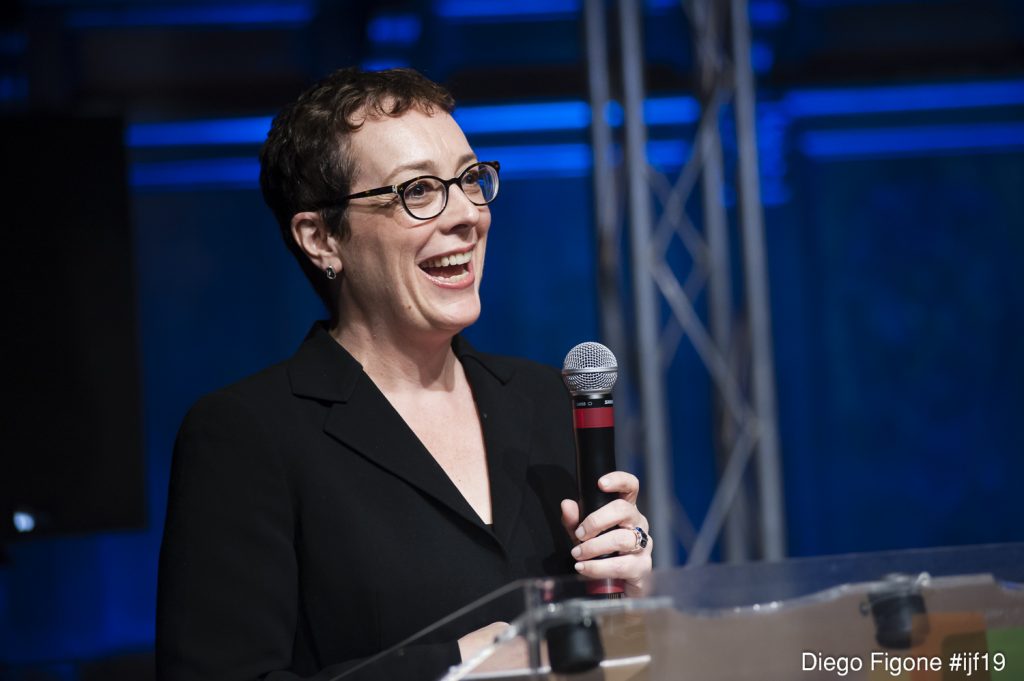 “Our job is to bring new facts to the table.”  With this phrase, Julie Angwin stated what she considers is vital for journalism, a profession driven by the concept that reporters are the witnesses of events as they are the eye of the audiences and access to places where nobody else can go. The tech journalist gave the talk Witness vs. forensics: the future of data-driven investigative reporting during the second day of the International Journalism Festival.

“Wow! they finally got somebody who knows something about technology to cover technology, this is amazing,”said Dan Gillmor, moderator of the talk and co-founder of News Co/Lab, from the University of Arizona, when introducing Julie to the audience reunited at Sala de Notari and remembering how he knew her work. Angwin is an American journalist who started her career at the news diary San Francisco Chronicle in the United States. Julie grew up in Silicon Valley, learned to program when she was in 5th grade and thought she was going to be part of the technology business; however, her destiny was in journalism. “This is someone who just not understands it [technology], but understands why it matters, what it does and what is doing to all of us”, explained Gillmor.

Angwin started her talk mentioning that before, we have been forced to not know about problems such as sexual harassment or permissive racism. Yet, this has changed thanks to technology because it has allowed the public to also become witnesses of events, raising their voice around them. “This is a good thing, but this also means that we as journalists need to evolve”, she added.

Julie identified two tasks in which journalists need to increase their focus on. The first one is what she calls ‘forensics’, looking at the information that is out there and verifying if it is true. The activity sometimes involves doing technical duties such as looking at the metadata of an image or trying to figure out if a photo or video is fake.

The second task is related to identifying things that people can’t see in sites where nobody is able to bring a camera. One of these places is inside something called ‘the Blackbox’. In Angwin’s words, this the “the automation, the algorithms that are driving many more of the decisions that our governments and institutions are making.”

To access these areas, journalists need to base their work in scientific methods. According to Angwin, reporters must test a hypothesis in order to figure out how much data they require to answer the main question of their journalistic investigation, and then see if the data supports their conclusion. “I think this is the better model than the one we used to call objectivity”, she argued. This doesn’t mean that journalists are going to be scientists, but they can add new skills to their newsroom. “Journalism is still the first draft of history, why we shouldn’t we be the first track of science too?”.

Julie recognized that what she enjoys the most about using the scientific method is that it freezes her up. “You don’t have to pretend to be objective, you are just testing a hypothesis and then you are describing the limitations of that hypothesis”

Most newsrooms have a data department which journalists use as a service desk to find information to support their articles. For Julie, this is not a great model because it leads to stories that don’t bring the whole picture. She suggested to integrate data since the beginning of the reporting as interviewing is a process of data collection.

As an example, Angwin referred to a story she did at ProPublica about political ads on Facebook. Julie and her team built a tool to collect ads on this platform and asked their readers to install the software in their computers. When they visit their newsfeed, the device identified the ads and then sent them to a public repository. The objective of the story was to identify what politicians were saying online, but it turned out into a bigger story. The journalists found that the top employers in the US where posting job ads targeted to people of certain ages, violating the Age Discrimination in Employment Act. After two years, Facebook decided to shut down these types of ads. “What I like about using the scientific method is that you can precisely diagnose a problem and that allows you to solve it.”

Julie doesn’t ignore the risks of technology. She worries, actually.  For instance, she’s worried about data surveillance in China and how this type of power affects citizens when it is the hands of governments that want to oppress. She also thinks about good legislation and believes that even though journalism can’t solve issues, it can illuminate the path to follow. “We see ourselves like throwing stuff over the fence and hoping that the policymakers will take that and do something with it”.

Building a newsroom with the scientific approach

After 14 years working at the Walt Street Journal and 4 in ProPublica, Julie decided to start her own newsroom focusing on original data collection, The Markup. The name refers to the acronym HTML, the language of technology, and the traditional system of news editing, marking in red pen the changes in the story. “Our mandate is to cover the impact of technology in society”. Julie hopes that her readers continue to participate in the construction of the reportages. Having in mind that sometimes data can be very revealing, her site will also be private sensitive.

The project, expected to be launched next summer, will follow a partnership model that allows Julie’s team to investigate on a global scale with domain expertise, in order to understand different context. “I don’t believe that we in New York should sit and do some sort of computer analysis and then write about something that is happening in Mexico”.

Questioned about the risks of automated data collection, Julie pointed out that this activity can violate the terms of services of various websites, representing a problem to the newsrooms. Therefore, she came up with a strategy for her project, “Our plan is to do it judiciously in the public interest, for data that is already publicly available.”

Because the public is now demanding changes in the tech industry, Julie Angwin considered that the best way she can serve to her readers is helping them to figure out what they can do regarding the impact technologies have in their lives. Journalists in her newsroom will focus on accuracy, making sure that the information is factual. “My goal with The Markup is to build kind of a model so other journalists can emulate it”.