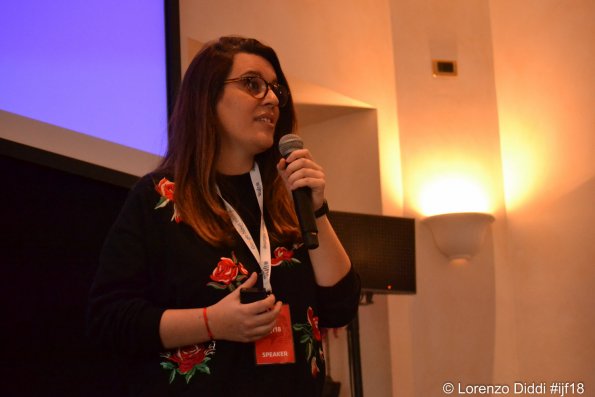 In January, Mark Zuckerberg announced the adoption of Facebook’s newsfeed to prioritize the posts of “friends, family and groups”, with unpaid content by brands and publishers set to decrease. As Facebook becoming close to indispensable to media to reach out to audiences, the move has sparked a lively debate amongst outlets around the world.

“It is a social media after all,” Livia Iacolare, head of media partnerships at Facebook Italy, said during the Internationa Journalism Festival’s opening panel How journalists can build informed communities on Facebook, which she hosted alongside Sarah Brown, training and news literacy manager of Facebook EMEA.

Friends and families should be first, thereby Facebook aims to foster an active use of the network.

People who use Facebook content passively – only read, scroll through but do not like, comment or share – have been found to have a worse user experience compared to others who actively engage, Iacolare said. The company is then forced to make an “educated guess” about what a person might want to see in order to increase his or her engagement. All this happens under Facebook’s premise to create a “better experience” and “meaningful use” of its product.

She then explained the process through which posts are ranked depending on user relevance. Next to monitoring a person’s activities and thereby assessing his or her preferences, person-to-person posts would now get a higher boost than page-to-person posts. Journalists should rely on the audience as amplifier, increasing the importance of an outlet’s active engagement and online relationship with users. The more people share and comment – and the more time-consuming an interaction is – the more “meaning” will be assigned to a post, impacting its ranking on other people’s profiles.  Meanwhile, pages that adapt strategies of engagement baiting, such as asking for people to share a post to get a reward or tag someone, will be penalized and decrease in the algorithm’s ranking.

However, the commercial side is not affected by the changes, potentially increasing the importance of paid content for publishers to reach the audience. Iacolare and Brown countered that the company had launched the Facebook Journalism Project last year, training journalists to improve their social media performance.

Video makes up 40 percent of all mobile traffic

Additionally, Facebook gives much importance to spreading videos. Currently, 50 percent of all mobile data traffic is made up by videos – a percentage that Facebook aims to increase to 75 percent in the next five years. As with all other posts, users’ engagement has big value. More than 40 percent of the video watch-time on Facebook comes from shares already – with the number expected to rise further due to the new algorythm.

Life videos in particular are seen as a successful tool by Facebook: overall, there is a six time higher interaction and ten time more comments to life videos than with regular ones. As a best practice example Iacolare showed Deborah Acosta’s life video for the New York Times featuring a series of little photographs that she followed up to a trash can in New York, which triggered a very high level of engagement with the audience.

Also, the ‘stories’ tool as adopted from Instagram has proven to be successful for the company: the number of people using stories has increased from 100 million in October 2016 to 300 million in November 2017. Iacolare specifically recommends stories with 6 to 8 formats.

At the end of Iacolare’s keynote speech, Brown took the floor to talk about the use of groups for media outlets for the means of news gathering, story telling and engagement. One example of how to use these groups beneficially from a commercial point of view for media outlets was to offer further content via groups as added value for the outlet’s subscribers.

Responding to questions on how Facebook would react to the problem of using groups on their network to spread hate speech, the speakers answered similarly to CEO Zuckerberg in front of the US Congress earlier this week, saying Facebook is working a solution and expanding its teams to improve machine learning.

Moving on to the much discussed problem of fake news, Iacolare and Brown referred to a different measures taken such as verification processes involving journalists.

Iacolare quoted Facebook’s motto of constant development: “Our journey is about one percent finished,” explaining that the latest changes in Facebook’s algorithm fall into a process of constant adaption. Brown added that reaching a  final stance on the impact of the latest development now would be too soon. Yet, they expect a five to ten percent decline in the user traffic for pages and publishers on Facebook, suggesting that to adapt to the changes, media outlets will have to experiment more with new innovative ways to increase the direct interaction with their audiences.