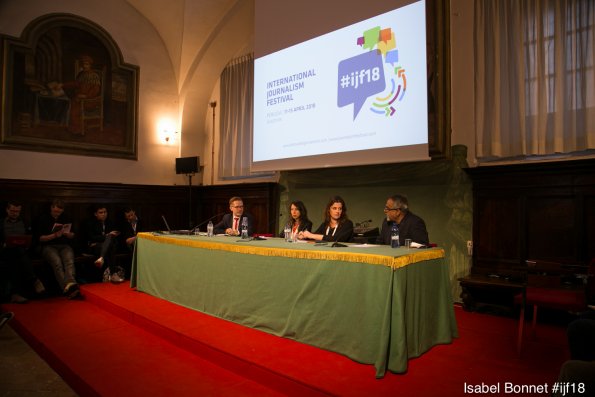 What is constantly changing in journalism isn’t just the way we tell our stories but also how we fund our stories. The world needs good journalism, and good journalism needs funding. As Rasmus Nielsen, the Director of Research at the Reuters Institute for the Study of Journalism, and the moderator of the panel put it: “The business models that sustained journalism in our parents’ generation are visibly waning away”.  Advertising is no longer the main source of funding: this is because of the advent of Facebook and Google, meaning advertisers no longer need media organizations to reach their target audience. The panel discussion on “The business of news beyond advertising” grappled with the question of new models of funding, and between the three of them, presented interesting and viable alternatives.

On the panel were three industry leaders working in organizations which all followed different models of funding. Raju Narisetti has managed major media organizations around the world and is currently the CEO of Gizmodo Media Group, a group of digital advertising sites. He is a proponent of diversifying revenue streams and gave a brief breakdown of the same for his media group, where only 50% of revenue is generated by advertising. The other half comes equally from native advertising and e-commerce.

“The nice thing about having a mix of revenue is that all these are under stress, but for different reasons at different times. So you could have a bad year in advertising but an amazing year in commerce,” he said to exemplify his point.

Janine Gibson, Editor-in-chief at Buzzfeed UK, brought in an editorial perspective of thinking about business models.“Despite me saying ‘I’m an editor, I’m a journalist, I don’t do business,’  all we ever talk about is business models,” she said to begin with, recalling not just her time at the digital-native Buzzfeed but also at the legacy media outlet The Guardian. She brought up an interesting point that, in her experience, advertising on the internet was a largely an editorial initiative two decades ago, and that it was hard to get the corporate side interested in anything other than funding through sales. She went on to list the various ways in which Buzzfeed manages to fund itself, ranging from selling cookbooks to producing feature films. “It’s a very diversified and flexible approach to the economy,” she said. She also emphasized the fact that they are always willing to experiment with new models and practices.

Reader revenue – and creating a dedicated subscriber base that pays for content – was the main buzzword for Renée Kaplan, the head of audience engagement at Financial Times. “The only way to survive is to get readers to begin to pay for quality content,” she said, summing up the line of thought that many in the media industry are currently focusing on in terms of funding. She outlined how FT had always been based on a reader revenue model, and how continuing that in an age where most content is free online is still working pretty well for them. This is intimately connected to how FT rethought the way to value their content – not in terms of the platforms of publishing but rather in terms of the value the content would bring to their readers. She also pointed out that this naturally affects journalism because there is now a growing need to know the audience that journalists write for, and to ask the question, “What are you willing to pay for?” to produce content accordingly. She pointed out that it’s much easier to know demographic statistics for the audience today than ever before, but didn’t consider this approach as data-driven, but instead as data-led. “[At Financial Time] we’ve now moved away from getting more and more readers in to actually getting the readers we have to stick around longer,” she said, putting forward a divergent point of view in an environment where the conversation is still dominated by the obsession with getting more readers.

From Buzzfeed’s perspective, knowing the audience was also important, not in terms of a paywall but in terms of knowing what their audience will relate to and share to increase the ‘social lift’ factor of stories. This knowledge also helps them tweak presentation of certain important stories in a way that they know will get the audience’s attention.

A variety of perspectives and experiences were presented and exchanged during the panel, but a few things were unanimous. Firstly, that a post-advertisement era is not going to be completely free of advertisements. It just means a decline in the ratio of funds through that medium. And secondly, perhaps, that there is no one correct alternative to go about it. Diversification and trial-and-error are key. “I don’t think one of us is right. I hope to God not one of us is right. Ideally, there should be all of us thriving in our different ways with our different models,” was how Gibson put it.