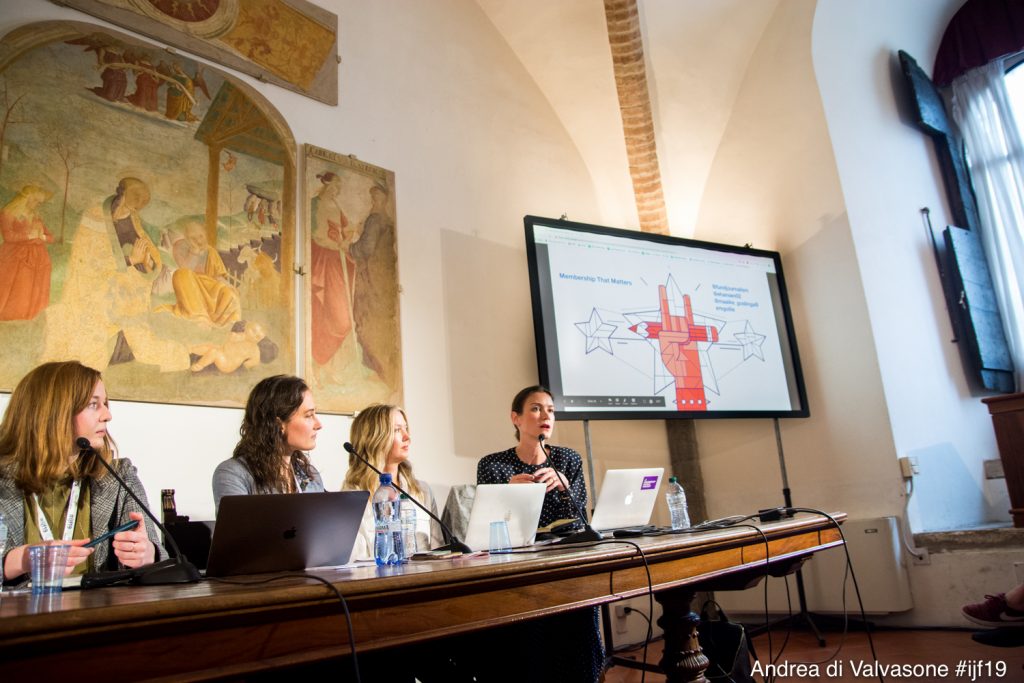 Journalism is no longer a one-way medium. Technology increasingly allows audiences to be involved in journalistic storytelling, from helping to inform which stories receive attention to shaping the way in which they are told. And in today’s climate of mistrust, journalists must strive to involve their audience in the storytelling process more than ever.

Membership Puzzle Project research director Emily Goligoski, speaking at ijf19 on Friday morning, stresses that “membership is resource-intensive. It really does involve a lot of workflow and process considerations. It’s not something that can easily be turned on and off like a brand campaign.” Membership is about more than just dissemination to a selective audience; learning from members is a key part of the engagement process and can have great benefits for a news organisation. “Membership in its most robust represents two-way knowledge exchange, not just broadcasting ” Goligoski explains.

Loyalty, not lists
But when a newsroom has a small editorial team wearing many hats, how does it find the capacity to implement an expansive membership model? The secret lies in the quality of membership, not the quantity; it’s loyalty, not lists. “We study a site’s most engaged supporters – their most loyal one to ten percent of people – with the idea that if you can serve those people well, it has virtuous effects on everyone else you want to reach with your coverage,” says Goligoski.

Mary Walter-Brown, founder and CEO of News Revenue Hub, adds that it’s not about the number of members an organisation has, but the level of engagement of its members. Whereas traditionally, numbers have been perceived to be key, experience has taught News Revenue Hub that the approach needs changing: “It’s really not about the list size; it’s really not a sheer numbers game. “What we’ve found, definitively, is it’s really about the loyalty of your list. It’s that percentage of your email subscribers who are clicking, and who are opening, and [for who] you are a part of their daily routine. You’ve provided essentialness and they can’t start their day, or end their day or their week without you,” says Walter-Brown.  Creating products that become almost indispensable for your membership – that come to form an integral part of their daily routine – is thus key to developing a dedicated and well-engaged membership that has real potential to benefit the quality of your organisation’s output.

“What we need to be doing is re-thinking: How do we use our products to best display our content and to best serve our readers ,” Walter-Brown explains. “Essentially what we are trying to do here is build a relationship; it’s as simple as that .”

When it comes to developing key messaging, Elizabeth Hansen, research fellow at the Shorenstein Center, says that considering your place in the market and your audience’s needs is a crucial step. “Before you can have a really robust keyword strategy and build it into your publishing workflow, you really have to understand: Where does your content sit in relation to similar news organisations? What do you think your users are going to be looking for on social when they’re coming to you?”  she stresses.

Hansen argues that an essential way of improving engagement and getting more out of your membership model is through email newsletters. “It’s really one of the best tactics to capture and retain the attention of readers… Really importantly, it’s a platform that you can control .” She has found that when a newsroom is able to develop a smart email newsletter strategy, “they can both maintain their core group of readers while also reaching out beyond those folks to grow their audience.” Furthermore, “using email newsletters to build audience and generate revenue is really as much an editorial practice as it is a technical and financial one,” Hansen explains.And asking dedicated members for money for something they value is not to be dismissed. Hansen argues that news organisations can and should be regularly asking for support. “We’ve really tried to encourage our cohort [to ask] on a regular basis .”

Membership in practice
Maaike Goslinga, the managing editor at Dutch organisation de Correspondent, highlights the need to not lose sight of membership from a more human point-of-view. “We see membership as something that involves human beings, who interact with you and who trust you and who would like to give you their money because they think you make cool journalism, but also because they know that you as a journalist take them seriously. So, we at de Correspondent put a lot of work into gaining the trust of those members .”

De Correspondent has invested a lot in its engagement, growing membership to 62 thousand since its initiation in 2013. The organisation has an extensive set of initiatives to get readers more involved in its output, including maintaining public workbooks to show members what they’re working on . “The important thing here is that the journalism actively engages in a debate with members,” says Goslinga. “Engagement of members comes in many different flavours,” she expresses. “I would see it as some kind of ‘engagement continuum’. So, below the ladder you have people who read and share articles, then you have people who follow correspondents on our site .” At the other end of the spectrum, members have been involved in proofreading. “There are members who have certain expertise and they can really contribute to the reporting by reading the piece before it gets published.” In some cases, members have even been inspired to write their own articles for publication.

De Correspondent is also creating new roles dedicated to developing and maintaining membership, including a membership director and a membership support manager. “We need these roles because we are working with members and we want to gain their trust, and you need dedicated people on that,” Goslinga explains. “But most importantly, it is a cultural commitment” she adds. “You need to hire people who believe in your cause.”