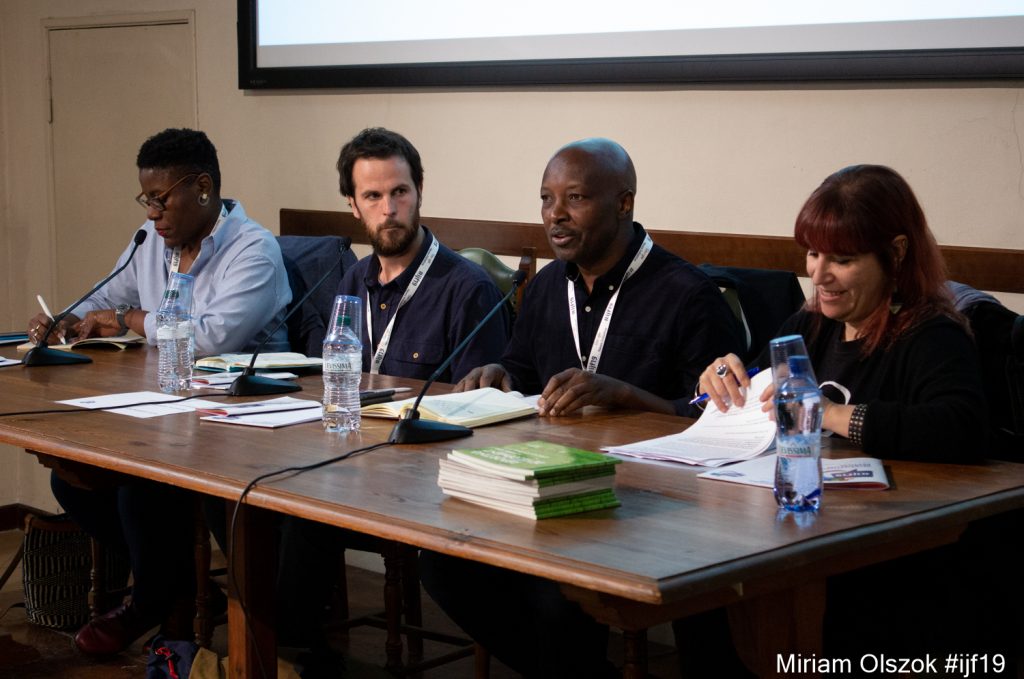 Should foreign correspondents in the “developing world” upscale local journalists, help them develop journalistic skills or simply refrain from shaping narratives around stories they have no personal connection with? Is there still space for the role of fixers? Is there a need for foreign eyes to give a fresh look at issues local people might be desensitized from?

Those and many more questions were asked on Saturday, the fourth day of the 13th edition of the International Journalism Festival, during the panel discussion moderated by broadcast journalist and media trainer  Joseph Warungu, in the company of  Eliza Anyangwe, journalist, moderator and founder of The Nzinga Effect, Paul Myles, Head of Editorial at On Our Radar and freelance journalist Emanuela Zuccalà.

“Parachute journalism is actually about power, and it’s about people thinking that they ( journalists) have the right to go in and shape the narrative of what is happening in a community without properly consulting it,” said Paul in response to Joseph’s request to introduce the audience to the topic of discussion. He went on explaining what his organization, On Our Radar, does in this context, namely: it plays a bridging role between communities and outside journalists by providing training and equipping the locals with the necessary skills, hence “helping them to shape their own narrative”.

It is an “extractive” and “power relationship”, expanded Eliza. “Parachute journalism is all about extraction” of already pre-determined stories from people that are merely seen as sources and in function of the stories they can tell. In her opinion, this peculiar but incredibly common type of relationship can be easily linked back to colonial times and to the biases, perceptions, and approaches which have been reinforced over and over ever since. Eliza further explained how the denial of agency to people in the so-called Global South is still extremely visible to this day and is reflected in the limited access that certain groups of people have to the tools, the capital, the platforms, and the nuance necessary to write a story.

Foreign journalists from the “developed world” still “maintain the power in deciding what the story is, where the story goes in, when we share the story, deciding in what languages the stories are in. And other people, no matter how we might want to involve in the storytelling process, are still the subject matter on which we build our careers”, she continued. Besides the idea of safety, which sort of justifies the journalistic intervention of foreign correspondents, that are protected by their nationality in countries where, “If you do it locally, you read the piece in prison”, Eliza believes that experts have taken over the whole of the media coverage rather than only being interested in providing an account of the crisis and emergencies. She pointed out that, most times, there is a lack of human level engagement and deep listening with the communities and, first and foremost, the whole relationship builds upon the assumption that “It usually takes a white man to objectively look at what’s happening” and usually the “longer your flight (of the correspondent), the more your objectivity”, she claimed.

“Are we seeing, you know, in Italian media, as populism rises, somebody inviting a Zimbabwean correspondent to come and give us their point of view because Italian journalists couldn’t possibly be objective on what is happening with populism in their country? That would be a laughable concept”, she asked rhetorically, exposing the relationship of systemic subordination between parachute journalists and communities.

Paul Myles, for his part, believes that there is still room for foreign collaboration in the current system and expands on how in his opinion, the audience actually appreciates the feeling of connection, authenticity, and universality of a story told by the communities themselves but there still is a place for an organization such as his to bridge the gap.

Emanuela, on the other hand, talked about how in Italy it is practically impossible not to get “parachuted” especially when working in a newsroom and about how she has personally been “parachuted” several times. However, she believes that that might not necessarily a bad thing if the journalist is able to treat local people the same way they would treat a person from their country of origin and added that journalists are still partially responsible for the shaping of narratives by the use of photography as well. “There are still a lot of opportunities for foreign journalists to tell wonderful stories from the developing world “, she continued, “also by collaborating with local NGOs. ”

Finally, Paul put emphasis on the importance of good characters telling powerful stories for the purpose of connecting with the widest audience from all around the world, whilst Eliza reinforced that there is only so much a journalist can do as an individual, other than treating people as narrators or reporters instead of sources. A much deeper systemic change is necessary and maybe, amongst all actors, it might be down to the editors to commission different types of stories that do not only provide a downstream picture of the lowest classes of people, whilst completely ignoring the reasons why those people are described as  “miserable” in the first place.