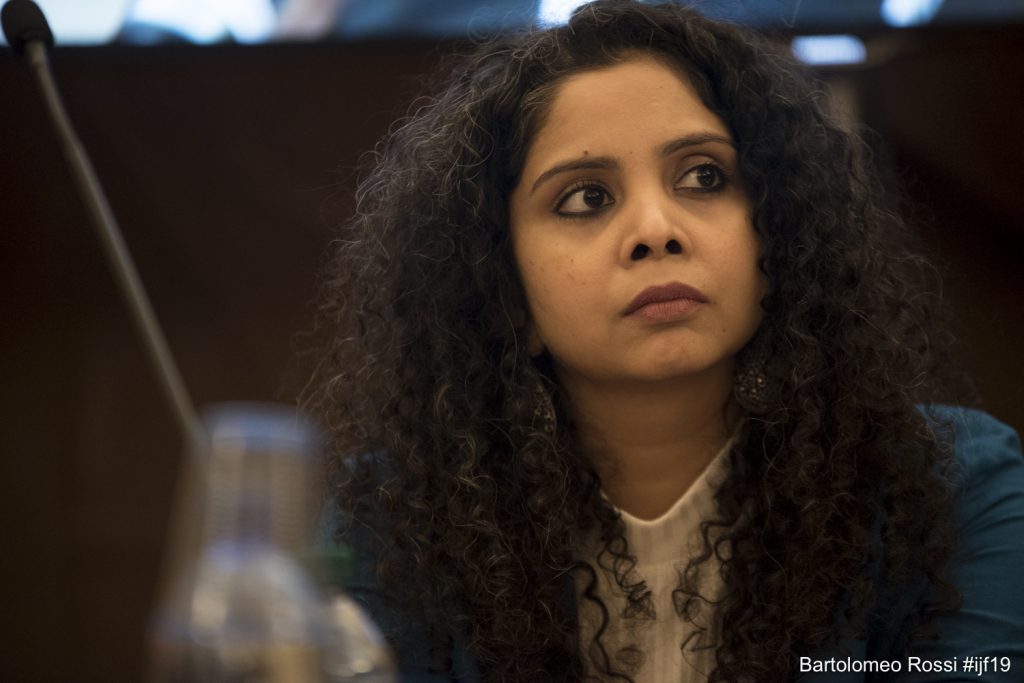 Against the backdrop of the time when two nuclear-armed neighbours stood on the brink of war, four journalists from India and Pakistan came together to lament over a common issue – rising pressure to curb freedom of media and dissenting views. Speaking at the session “Freedom after expression: censorship of the press and violence against journalists in Pakistan and India”, Pakistani journalists Gul Bukhari and Taha Siddiqui began by apprising the audience of the events that marked the beginning of their persecution back home.

Pakistani journalist Bukhari spoke first, telling the story of the night she was abducted. On a seemingly normal day, while she was travelling to work for her current affairs show, her vehicle was intercepted and a planned abduction carried out. At first, the men said that their vehicle was a stolen car. “I sensed it, within a few seconds, that something is really wrong”. Bukhari rushed to the barrier as the men caught up to her. “There were also men in uniforms, holding guns and guarding the abduction,” she recounted. Despite her attempt to escape, the men quickly got a hold of her, at which point she was choked and blindfolded before being driven off to an unknown location.

“Unbeknownst to me, obviously, this news of what had happened broke within 10 or 11 minutes on social media and it was picked up by journalists, different news organisations, political parties, party heads, and it went into mainstream and international media within about an hour and a half. And there was a lot of pressure that got built up. I did not know this. I was obviously in captivity,” she said. The journalist said that she was eventually released after four hours. “This was not the only way of curbing freedom of expression or dissent. A lot else had been happening and kept on happening. This includes threats, this includes you getting fired from your news organisation, it includes having your columns blocked, dropped from the websites, it includes abuse and threats on social media,” she continued.

Moderator Aliya Salahuddin then turned to question Taha Siddiqui, to explain in the context of his failed abduction how journalists in the country were made to go off record. The Pakistani journalist said he was travelling to the airport on the morning of January 10, 2018 when armed men forcefully stopped his taxi to whisk him away. The armed men encircled him first and then started to beat him up as thousands stood witness, adding that only one female student came forward as an eye witness. “That’s the kind of fear that people have, that they don’t come forward,” he continued. He escaped by one of the doors and managed to go to a police station. The journalist said that the abductions have become so common, with people not returning for periods from weeks to years. This generally happened when the work of journalists was related to the military, he added.

Following the abduction fiasco, Siddiqui said that he was invited by the interior minister to discuss his case, where the minister advised him to write an apology letter. Siddiqui said when he asked what should he apologise over, he was told “forgive me for everything” by the politician. Siddiqui said that he would get calls on and off , claiming that his wife would also get harassed, and their friends were told not to visit them. He said that following these developments he made the decision to go remote but still talk about his home country.

Rana Ayyub, by way of introduction, recalled how at the age of 26 she sent a serving Indian home minister behind bars on the basis of his call records related to extra-judicial killings of Muslims and Gujrat riots in 2002. She said that she decided to go undercover because PM Modi, then Chief Minister of Gujrat, had allegations of presiding over a genocide of thousands of Muslims under his watch. Ayyub mentioned that the commissions of inquiry could not prove anything due to fear of repercussions.

To get to the bottom of the riots in Gujrat, Ayyub said she acted as a Hindu nationalist student from America, and had seven to eight cameras on her body to record statements. Rana Ayyub said that she began by socialising her way through the society to infiltrating official ranks, which in eight months’ time led to a series of damning confessions from the bureaucrats, officials and then home secretary, with the last person being Narendra Modi himself. She stated that there was “damning testimony” that the provincial head had approved the genocide.

Rana said that her dream crashed when the organisation she was working for killed the story as it involved Modi. This led to the young journalist self-publishing the book as another media house backed out of publishing it due to Modi’s political clout. “I self-published because I was getting anxiety attacks, I had a nervous breakdown because it was difficult to sit with that kind of truth with you, with those kind of tapes, knowing there is a minister who was complicit in a genocide and also who’s now your Prime Minister” said Ayyub referring to her ‘sting operation’ on 2002 Gujrat riots.

Ayyub said she used some gold reserves saved by her mother to initially self-publish 500 copies – only to find there was not a single news story on the revelations. The word of mouth travelled fast then and people started reading the book, she said. Within two years 500,000 copies were sold in 16 languages as the book became an Amazon bestseller, Rana Ayyub told the audience with a flourish a pride. However, the moment did not last long as the Indian journalist said that the glory brought its fair share of misery upon her as she was targeted due to her work and as a “practicing, Muslim woman”.

The moderator continued the discourse by turning to Indian broadcast journalist Ritu Kapur and asking how she saw the mainstream media and its propensity towards propaganda. “I think there is absolutely no doubt” she responded, “you see it unfortunately in a lot of capitulation by the mainstream media in the country”. It has unfortunately become the vehicle for driving the agenda of a certain ideology, asserted Kapur.

She said India was becoming a Hindu-majority state, adding “there is actually an insecurity being drummed up on how the Hindus are under threat”.  Under the orders from ministry of health affairs, there are 10 surveillance agencies empowered to monitor, intercept and decrypt digital devices of all citizens, she said, adding that there existed massive IT cells, having well-funded trolls. Kapur explained that the defamation laws in India were criminal and most media organisations and journalists have a bunch of defamation cases against them.

The journalists unanimously spoke about the control from the sources of funding, which was from the government and corporate media houses. The panelists spoke of recent collaborations of Facebook and other social media platforms with the civilian governments, exacerbating the situation. Pakistani journalists Siddiqui and Bukhari said that they received notices from Twitter for posting alleged anti-state views. Bukhari said that those who got either abducted or killed there case did not go anywhere. She said the recently-introduced Cybercrime Act was being used to hound and harass journalists and bloggers, and people were put on the Exit Control List randomly.

When the discussion moved over the recent Pulawama attack, the journalists were inquired by the national propaganda that ensued. Kapur was of the opinion that the situation became a welcome opportunity to beat war drums. She lamented that how there was very little reporting being done on facts. “The Pulwama attack which killed 40 CRPF soldiers, there was a vehicle loaded with 350 kg of RDX. How does such a massive security lapse happen? But you just can’t do that questioning,” she said.

Rana Ayyub said it was an embarrassing time to be a part of the Indian media as it was casting aspersion on Indian Muslims as well. The attacks on Kashmiri students afterwards, were not questioned by the mainstream media, she said. Pakistani journalist Taha Siddiqui said that even if the Pakistani media took higher moral ground over peaceful coverage but no one spoke about the Jaish-e-Mohamad, the presence of the seminary near to the place where airstrikes took place. The speakers said no one, including the mainstream media, asked for evidence on the alleged 300 killings in Indian airstrikes in Balakot. Gul Bukhari said that media became quite nationalistic and jingoistic on both sides, instead of sitting together and discussing sensibly.

On a positive note, Rana Ayyub also expressed optimism over the fact that any contact somehow was established between the people of the two neighbouring countries despite them being at the brink of war. The Indian journalist also lamented how people-to-people contact was frowned upon in India. “This is quite promising and heartening and that’s how we go forward from here.”