Whistleblowing as a phenomena holds many connotations. Some people see the whistleblowers as people who were brave enough to go through their fears and reveal the secret information to the public. Some people see them as traitors and treat them accordingly so due to the tender and controversial nature of the term itself, the process of working with whistleblowers is a tricky subject for a journalist.

That’s why the Perugia Principles, the guideline for journalists working with whistleblowers, appeared to become a severe step towards putting the process into order. The panel held in the Sala Brugnoli on Thursday evening featured five great participants who have their word in the world of investigative journalism. Two of them — Julie Posetti and Suelette Dreyfus — actually put their hands on the process of creating the new guidelines. Together with three investigating journalists, they were part of an intense discussion on a controversial topic. 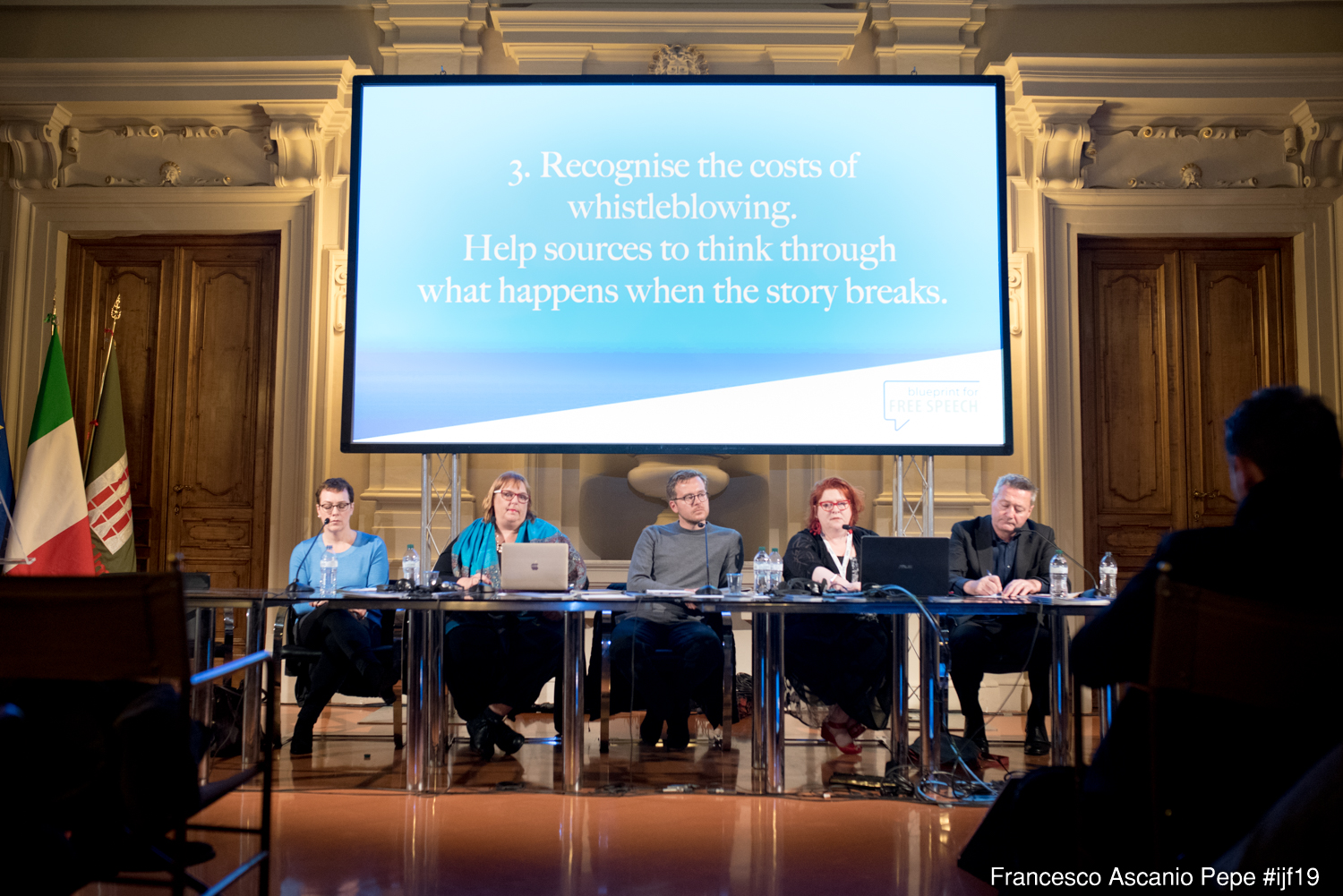 The main focus of the discussion was whether the whole idea of whistleblowers is perceived and proceeded right by the journalists in the digital era. The speakers agreed on one significant thing that became a crucial point for understanding the way you work with the whistleblowers: the human nature point of view. «The whistleblower is not just your source of information. It’s a human being with a lot of fears», said Frederic Obermaier.

The Principles include a critical aspect of working with whistleblowers, which is recognizing the costs of whistleblowing. Often people who decide to go for it don’t have the full idea of what’s going to happen once the story is out, and it’s the responsibility of a journalist to explain it. Julia Angwin reminded that it’s almost never a journalist who goes to jail or faces the legal responsibility, it’s usually the source, hence it is the journalist’s responsibility to make sure the whistleblower themselves know what awaits them once they pass the information.

Security and protection became the key-words of the panel discussion. Those elements are marked as the main points of the 12 Perugia Principles and all the speakers stressed out the importance of secure first contact with the whistleblower. Julia Angwin believes that the culture of encryption and usage of protected channels of communication is the basic need for any journalist, that’s why in their new project, the Markup, they start with using the secure channels, so that both journalists and people contacting them would know that they are as safe as possible in this situation.

One of the most important things to consider while working with whistleblowers is not only technical security but also being able to explain the weight of responsibility that blowing the whistle puts on a person. Furthermore, the emphasis was put on the ego of both the journalist and whistleblower when dealing with such a situation. Sometimes following the principle of protecting the whistleblowers means to lose a story; sometimes a whistleblower, blinded by the famous examples of Edward Snowden or just their own ambitions, expose themselves once the story’s airing. Both of the ends of the spectrum are dangerous, and both lie in the field of human relationships, which after all becomes the main frame for the whole process.

Another vital thing about the 12 principles is that they are written not only for journalists but also for whistleblowers themselves. Jared Ryle mentioned that “in most cases, the mistakes the whistleblowers make are usually made before they come to journalists”. To do better in terms of educating the public about the right ways to communicate in the digital era is an agenda required nowadays.

But if we are educating people on how to blow the whistle right and how to get away with that after the story’s out, how is it possible to keep the line between the thirst for justice and total «soviet» situation, when every person blows a whistle on another on an almost daily basis? Julie Posetti mentioned that the line between the terms «spy» and «whistleblower» is really blurry, and that’s a serious issue to get over. «It’s the media that makes a difference,» said Suelette Dreyfus, «if you only have internal whistleblowing, you strengthen the power of the central entity, the central corporation state. If you allow third competitive channels, you weaken that».

So far with the debates around whistleblowers and the protection of them, it seems like the next threat that might come out of it is getting misinformed. Jared Ryle believes that now, with quite a number of examples of successful whistleblowing cases, journalists take extra responsibility for making sure they are not being set up. It makes sense: the leak is usually something which is not commonly known and easily checked, so there is a particular possibility that a person is going to deliberately give journalists wrong information that might backfire on the whole journalistic system — and the rest is a detective plot for a book.