In a time in which the ways we tell and see stories are undergoing massive changes in format, a conversation about the present and future of photojournalism is not only relevant but also necessary.

The panel “A decisive moment: reimagining photojournalism for a digital future” did just that and managed to gather a large crowd of journalists and photographers alike keen to listen to what Jeff Israely (Worldcrunch), Francesca Sears (Magnum Photos), Dan Gaba (The Wall Street Journal) and Francesco Zizoli (Noor) had to say on the matter.

Referencing Henri-Cartier Bresson’s famous “decisive moment”, former foreign correspondent and co-founder of global news website Worldcrunch, Jeff Israely opened the talk calling this moment “decisive” on the reshaping of photojournalism as we know it. Sliding through some of the crucial moments in the development of photojournalism, Israely singled out the 50th anniversary of J.F. Kennedy’s death, an event that not only shook an entire country but also gave way to new approaches on covering such news using a camera as  photographers Bill Eppridge and Paul Fusco did.

“We can all agree that still photography can do something that no other medium can do” Israely said, “and that’s still the case today and so there is a reason why still photography is still with us, still matters, and it’s something  we should figure out how to keep with us, in all its forms”, added Israely kick-starting the conversation on how photography can capture events in ways in which other formats can’t expect to. 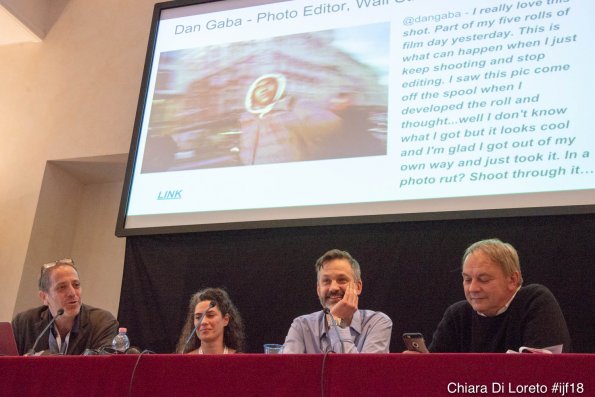 Francesca Sears, director of special projects at Magnum Photos, continued the discussion and followed in on the debate discussing the role of digital media and the way Magnum manages to use it to keep telling stories and reaching out to ever wider audiences. Presenting a selection of some of the best photo essays Magnum published in the last few years, Sears focused on the new interactive and comprehensive ways digital media has to offer, but also discussed the opportunities of taking the time to really build long-form, mixed projects that wouldn’t find space on traditional media that could not otherwise find an outlet in the traditional media.

Sears listed the advantages of the digital world, such as being able to speak directly to audiences, engage and understand their needs or collaborating with media partners to offer different viewpoints on the same subject. Giving tips to photographers all over the world on their website was also listed among the advantages of the digital world, as Sears also pointed out. She weighed on the importance of photography, as she feels “strongly about the power of the still image” – I think you hold in your mind the still image for longer than perhaps you remember the video”.

The discussion then passed on to Dan Gaba, photo editor of the Wall Street Journal, who candidly talked about his Instagram account explaining how online interaction helped to bring the public (more than 20.000 followers in his case) behind the scenes but also to find a type of creative freedom outside the specific parameters dictated by the newsroom. This new type of freedom ended up inspiring him and made him encourage others to look at unpaid work as a gift because of the lack of pressure and expectations can lead to new ways of experimenting and having fun telling a story. He then went on to stress the very importance stories have in his work as a photo-editor: “I think that what gets lost a lot of times when we talk about photography, is that these are stories that you’re telling me, and so, please know the story that you’re telling and then please tell it to me, and my job as a photo editor is to have a discussion with you about it. (…) My job is to tell you that if that’s the story you’re telling me, you’re not telling it, if that’s the story you’re telling me, you are nailing it, and you should go back an do it. And that’s how we can get stories out of one another.” 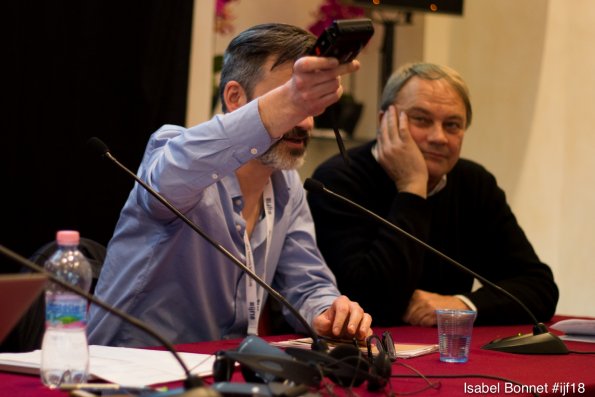 Francesco Zizola  then followed with his story, as the co-founder of NOOR photo agency and foundation and runner of 10b Photography, but also especially as a professional photographer who has covered many major conflicts around the world. He used  In the same boat , one of his most recent works that was screened during the panel, to introduce this new way of telling powerful stories, mixing photography, moving images and sound together. Having worked with Médecins Sans Frontières  at the NGO’s request to intervene and help portray the terrible refugee crisis from 2015, Zizola decided to find the best and most compelling way to bring this tragic story to the wider audiences: “I reflected a lot on the current state of the media, on journalism’s state of health”  he said, while asking if making a good coverage was enough to get the story through and help. He also stressed the challenges journalism now faces, not only in front of the audiences that are shaping its ways, demanding a certain type of format, but also when it comes down to embracing new visual languages. Reminding that journalism is not only made for consumption, but also has a key role in creating historical documents, in giving a certain sense to things, he added that “there is a need for an ecology of journalism content.” Zizoli also touched on the very important aspect of visual education: “There is really a need of visual literacy, and then that also concerns the world of information, of course.”

The panel concluded on this note, with Jeff Israely also insisting on the need to teach people ways to actually look at images and not just consume them in evermore crowded online feeds, reminding us that ”images can be powerful, can be beautiful, but they’re the most useful and the most enriching when they have a story to tell.”