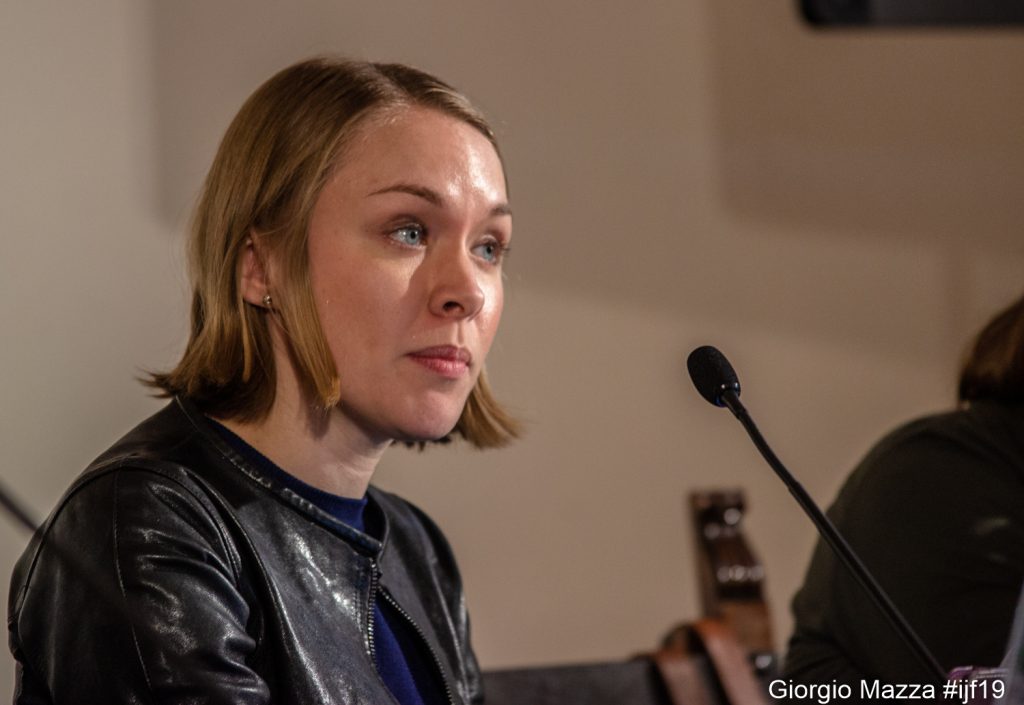 Migration has remained one of the pertinent aspects of any civilization, with the last few years seeing a high surge in cases, whether internal or external. According to the United Nations, the number of migrants rose from 173 million in 2000 to 258 million in 2017. Seemingly, together with this increase, the world also witnessed a spike in reporting on migration-related issues. On the second day of the International Journalism Festival, four freelance reporters came together to discuss how migration issues can be put forth more transparently and diligently. The panelists included moderator Jennifer O’Mahony, photojournalist Ricci Shryock , data journalist Carolyn Thompson and Pamela Kerpius, who documents stories of migrants reaching Lampedusa.

The first question from the moderator revolved around going about the stories on migration and finding the right people. The panelists, in unison, explained that in majority of the cases journalists get access to migrants through NGOs working in a specific area, mostly trying to project a positive picture. Ricci, who is based in Senegal and covers issues in West Africa, said that in Nigeria and Libya, UN agencies such as International Organisation for Migration take journalists to the centre where migrants are kept. Apart from the NGOs, locals and fixers also aid in reaching the camps of migrants, she said, adding that one should be mindful of how NGOs impact reporting as they might want to send a message about their work.

Journalists need to see what kind of information they are getting as the migrants might have a different story to tell, she said, cautioning that it is always pertinent to look at the bigger picture. Discussing the subject in detail, data journalist Carolyn Thompson said that access in South Sudan is very limited due to civil conflict, and the only way to approach migrants is through NGOs. She continued that in the case of Uganda, security situation is different and one can go to places to approach refugees.

Thompson enunciated her point by giving an example in South Sudan, where 2016 fighting resurged and the war moved to the southern part, where the conflict hadn’t been very active in recent years. As a huge chunk of population migrated to camps in Uganda and formed settlements quite quickly, stories surfaced that the NGOs were taking care of the situation, but the ground realities differed. She explained how people did not have clean water, while a lot of the donated food was perished and not consumable, but the NGO couldn’t talk about the situation as they could have lost the pre-existing aid. Thompson said that a journalist’s over-reliance on NGO information and access can mold the narrative of their news stories, and that those visiting for a short period might end up only seeing through the lense of the NGO.

Pamela Kerpius said that, while documenting the stories, it is more important having a kind of connection as these people have suffered innumerable losses. She said that when she started documenting stories it was mostly about acknowledging the struggle of the migrants. “As the work kind of continued, and I got more of these stories built up, it very clearly turned into some that was gonna be a historical archive. This is the history of Italy, the people who are coming here” she said, referring to a report on Lampedusa.

The moderator then turned the discourse towards bursting myths about migration. In response, Pamela Kerpius referred to the popular notion about migrants thronging to Europe, by saying that she documented several cases where people told her they didn’t intend to come to Italy and Europe at all. She explained that many people move regionally and do work for a while, but the system mentions them as outsiders and it becomes easier for them to get trafficked into Libya over the course of time, and eventually their only option left remains to cross the Mediterranean.

On busting myths, Thompson said that very often people rely on anecdotes, but at times the cases differ. She recounted that while working in Ghana on migration patterns, she came across a man from central Ghana, who was fairly well-to-do and known in the community, but still wanted to migrate to Libya. She said that it was not a case of someone being poor and desperate, but rather a way to find a better financial opportunity, since the person in question moved to work in Libya’s oil and construction industry rather than finding work in a big city in Ghana.

Thompson emphasised that migration takes into account regional and external influences, along with personal choices of people. Migration is often internal in nature, she added. She said that she finds some of her non-data stories quite anecdotal and some situations are far complex to comprehend, as when they surface from refugee camps they are likely to be heavily politicised.

Thompson in this regard presented the case of South Sudan, where the economy suffered due to the conflict as oil production and agricultural cultivation came to a halt. She said that the harvesting area was shut down as cultivators were said to be siding with the opposition and were being targeted as well. During the session, she also highlighted the use of satellite imagery as one of the useful tools for presenting the narrative on changes in demography. The journalist said that data helps confirm stories that are being heard around and to gauge the scale of damage and demographic changes.

On the question of ethical reporting, Photojournalist Shryock said that humility should always be a priority, with one having to understand that these people do not have a free choice to move like others, and most often are not welcomed in the new places. The journalist said that when there are some migrants who do not wish to have their faces shown, she often has to rely on other means to capture their image. Shryock said that she works with shadows of people in photos too, but they often leave her unsure about the image she is projecting. Speaking of a female football player from Gambia who drowned in the Mediterranean, she shared: “One thing I wanted to do visually was to show the life that she had left behind and show how full it was”. The journalist said that it is imperative to show diversity and not only paint a picture of sheer misery, adding that she wants to put forth images that don’t diminish a person’s humanity.

The discussion was followed by an interesting question and answer session, where one of the audience members pointed out that all the panelists are freelance journalists and asked how that pans out for them. The speakers agreed in unison that although the stories do not provide same amount of sustenance as a regular job, they give them freedom to choose what to report on. Kerpius said that when she meets people it is about trust and incredible freedom, while Thompson said that journalism grants often aid in pursuing a story that needs more resources. The panelists also laid emphasis on giving due credit to the other people and local journalists involved in the projects, as that is the right thing to do.