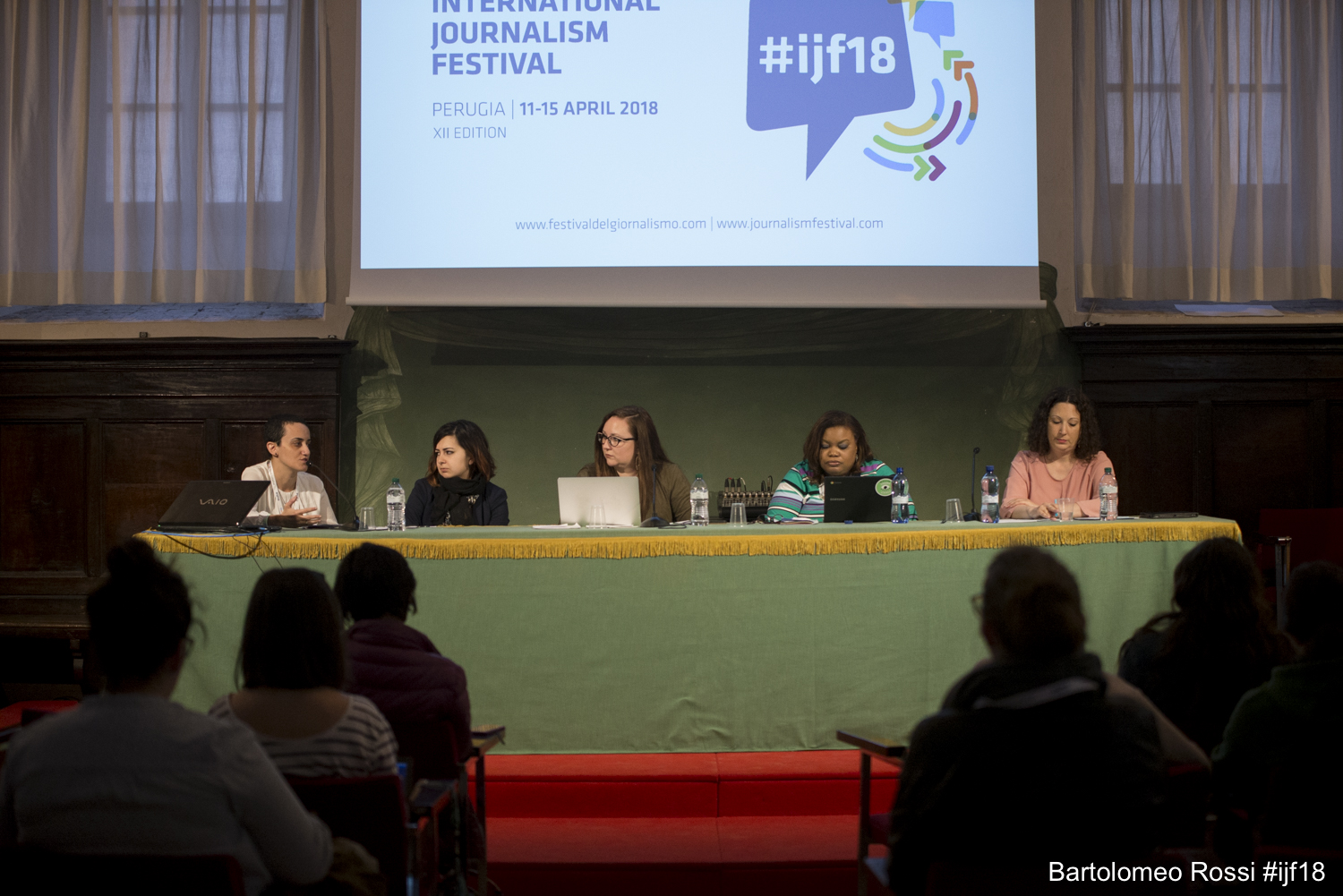 Part of the #UsToo festival category, the Sexual violence: a silencing tool discussion tackled the subject of sexual harassment that women journalists face both on and offline, also touching on the general safety issues  and on the need to create and implement actual policies in the newsrooms. Courtney Radsch, currently working for the Committee to Protect Journalists, was joined in the conversation by Lina Attalah,  Anna Lekas Miller,  Rosa Meneses and Tracie Powell, senior fellow for bipartisan foundation Democracy Fund.

The fact that we are finally seeing more focus on women in the media and the challenges they face is a welcomed consequence from campaigns such as #metoo, helping to get the conversation started, but as Courtney Radsch emphasised, there are lots of other steps to be taken in order to create a culture of safety in newsrooms and to include gender in trainings and conversations alike.

Rosa Meneses shared her experience on covering conflict zones like Lebanon, Iraq or Syria with little or no training at all and how she felt the need to encourage newsrooms, journalists and organizations alike to take this matter more seriously and think about safety first. She got the wake-up call when she got shot while covering the war in Libya: she only managed to survive with the help of colleagues from Channel 4 UK who borrowed her their flak jacket, as they saw that hers had no plates and was in no way suited for covering that conflict. After that traumatic event she realised she needed to speak up about how these situations are being managed in and outside Spanish newsrooms: it wasn’t easy but after many meetings and conversations she managed to obtain some good results on what otherwise would seem an obvious and urgent matter. The trainings, however, took place after going twice more to Libya and did not tackle the subject of sexual violence or any other kind of gender based approach, so there’s still a long way to go in this regard.

As a freelancer instead, Anna Lekas Miller felt lucky enough to be able to attend and, at times organise trainings and that she’s a journalist in an age when this subject is getting a lot more attention especially for journalists such as herself, who don’t have an organisation they can ultimately rely on. Still, she thinks that there still is a need for more conversation on the matter, particularly when it comes to peer support: “Often, when our jobs are very precarious, all we have is each other at the end of the day, so we really have to have each other’s backs!”

Furthermore, as risk assessment still tends to focus more on injuries, kidnapping or car accidents rather than sexual assault or other gender related issues, Miller also drew attention on the pressure journalists feel to appear and be tough, especially in a male dominated realm. A perspective that was also emphasised and shared by the speakers on the Fighting back: how should journalists respond against attacks online? workshop, Miller finds it imperative to challenge this attitude and start treating sexual harassment, for example, with the same degree of attention and seriousness that kidnaps or other threats are being treated.

Following on the subject of intersectionality of gender, race and sexual orientation, Cairo based publisher Lina Attalah talked about the conscious effort she puts into creating a balance in the newsroom and about the need to think of gender in an intersectional way, and not just focus on having equal percentage representations.

In terms of safety, having lived through the 2005 events when Egyptian police deployed troops that sexually assaulted women covering a major referendum and protests, she found herself asking if she could go on doing this job, but also later on felt encouraged to actively think about solutions to protect women and to include them as much as possible in newsrooms. She was glad to discover that even with the rise of the Arab spring and increased police violence, there were actually more women journalists willing to take risks and get involved: “The idea was always to try to capitalize on that energy and to basically encourage it whereas in other environments it’s just basically stifled a lot of the times.”

As more specific steps were needed, especially after reports of sexual mobs targeting women journalists, they started by sending teams to cover potentially dangerous subjects, instead of individuals and they are also providing mental health support post-incidents of any kind of disturbing nature.

Moving on to the online threats that tend to target women, Tracy Powell, who runs Digitogracy, a website that was the target of hackers and rape threats with very real consequences, emphasised the fact that conflict zones are now a much more relative and diffused matter.

Especially when covering subjects such as race, becoming a target is almost inevitable, and “people, for some reason feel like that gives them licence to email you, to threaten rape, to find out where you live, to call your doctor and try to get your records, personal information online.” Powell states that there cannot be a conversation about gender without including race, going ahead and also telling some of her experiences with harassment ranging from state officials to colleagues or sources. Noticing how in the US some of the newsrooms are having guidelines drafted for women, helping them to take the necessary steps in harassment situations, she feels that it is not nearly enough and that it needs to become a routine training.

Both Miller and Attalah then took on the matter of sexual harassment happening virtually everywhere and with everyone – from people you interview, to newsrooms or progressive organisations and how traumatising it can get especially with how people tend to respond to it (by downplaying it or downright not believing it at times). And even though movements such as #metoo are lending a helping hand and the subject is finally being talked about, with people being held accountable for their actions, the need for a sexual harassment policy is immediate. For Attalah this is now her top priority for the newsroom she manages, as she reflected on the fact that up until this point the fact that she was working in a progressive organisation led her buying into the illusion of a safe environment, but as the #metoo movement had a strong resonance in Egypt as well, stories came out even from such seemingly safe environments.

Wrapping up the conversation and also touching on some of the questions received from the public, the four speakers highlighted the need for a culture of accountability, for having men on board also and make them an active part of the conversation and really focusing on developing a gender policy that protects journalists.