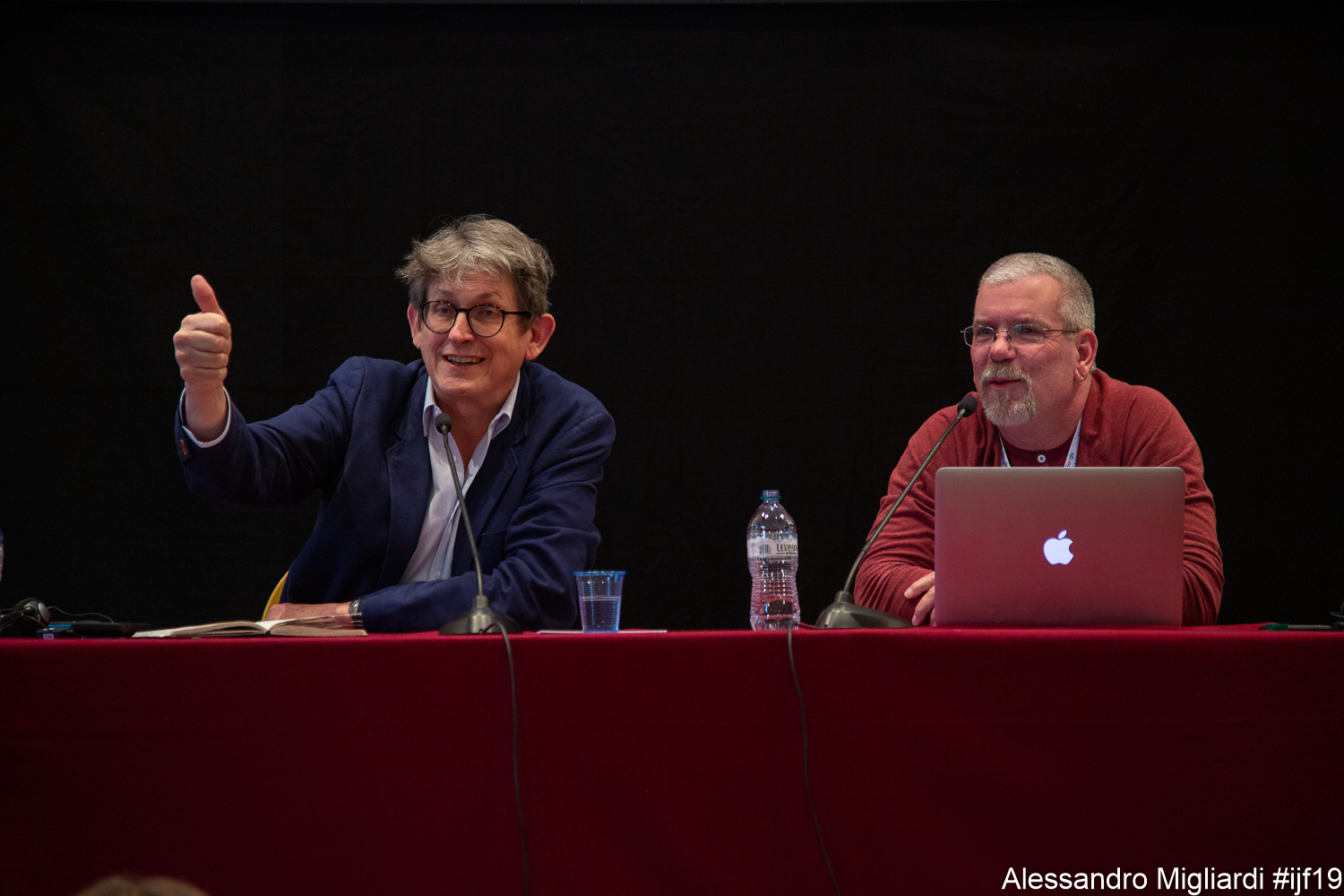 From being taught how to befriend widows, only to then insult them to prevent them from opening the door to any other journalist in 1976, to sitting as the editor-in-chief of The Guardian for 20 years: Alan Rusbridger has seen “more disruption in media than in the previous 100 [years] or so” in the words of Mathew Ingram, chief digital writer of the Columbia Journalism Review. He now chairs the Reuters Institute for the Study of journalism while working as the principal of Lady Margaret Hall at the University of Oxford and the journalism landscape he sees now is vastly different to the one he started out in his days at the Cambridge Evening News, 43 years ago. With the birth of the internet and introduction of social media, we’ve seen a huge shift into how news is consumed. What news organisations prioritise and the dynamics of industry are constantly changing with each new breaking news story. However, Rusbridger suggests we should look at “what we’re losing or what we’ve lost before you can plunge into what the world is going to be”

In his early days, the newspaper was the “glue that held the community together”and journalists were liked and well trusted because they were the gatekeepers of information. He says they welcomed you in “even if you were about to behave disgracefully to widows,” and there was never any mention, or need for the mention of ‘business models’ within the industry – newspapers made money because people wanted the news. However, we also can’t get caught up in the ideology that it was ever perfect to begin with, and that the ‘models’ we had in the past were ever the ‘correct’ way of doing things. Rusbridger says, “there’s this narrative about journalism that is very easy to get sucked into: ‘we are the truth tellers, we hold power to account, we tell truth to power,’ at our best, sometimes we do that”. He continues, “it’s a great mistake to oversell journalism.”

But even without the rose-tinted glasses, it stands true that journalists were respected in society, they were trusted with facts and current events. When people wanted to know what was happening in the world around them, they would turn to journalists to get that information: “if you had a printing press you were part of that that world of scarce information and you were almost literally above your audience and you almost literally handing down a tablet of stone to them and they miraculously handed their money up to you and that gave a sense of what we thought of as authority or expertise and it was a lovely world”.

Now we find ourselves in the digital era, just about anyone can publish anything on the news and claim it to be journalism. People see less need to pay for newspapers from stands, because they can access all that information on the web for free, Rusbridger says, “the world at the moment feels particularly dangerous and chaotic in terms of having a factual basis for society and I think maybe people are drifting back to an idea of journalism as people who can provide that factual base”. This leaves the news industry in a tricky situation, because they still need to earn money. But how can they manage that when so much other information is free across the internet?

When trying to find solutions, Rusbridger’s colleague at The Guardian, Clay Shirky, got a focus group of readers together and explained to them the two models they were considering. The first one was the ‘olden style’ model, where users can pay for a “private good” which gives you exclusivity and means you can have what someone else can’t. The second model is a ‘public good’, meaning subscribers would be funding The Guardian as a whole, so that anyone who wants access to high quality journalism has it there at their fingertips. Almost none of the focus group raised their hand for the first model, but every hand went up for the second model, which is the direction The Guardian decided to go it. Rusbridger believes this is because their audience understands that “the world needs news.”This membership model has now surpassed one million subscribers to their website which allows them to continue their work without excluding a huge demographic – something that can easily become problematic. 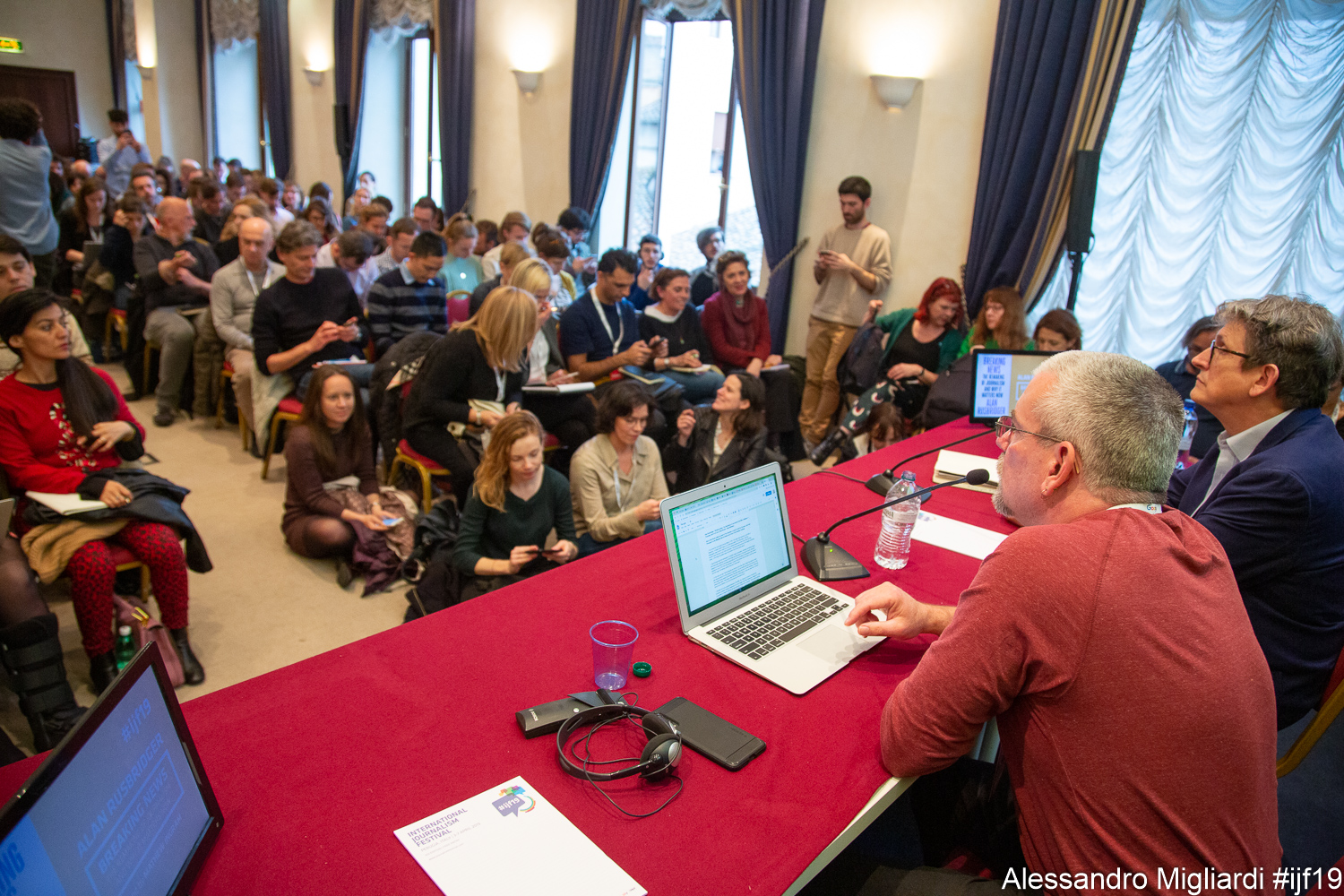 Had The Guardian opted to go down the exclusivity route, this would likely have meant putting up a paywall to access their content online. Rusbridger wasn’t a supporter of a hard-paywall, as he knew this would alienate a large portion of the readership because they didn’t necessarily have the extra cash to pay for content. Ingram suggests Rusbridger’s hesitation was because he “didn’t think that [a paywall] was conducive to this open journalism, that if you created a walled garden financially it would make it harder,” which Rusbridger confirms is true, but also stresses that you cannot grow readership if you hide your content behind a paid for barrier. While he isn’t strictly anti-paywall, he does believe that “paywalls come at a democratic price.”

For example, while writing his latest book, he came across “this horrible stuff going on about Swedish girls being raped in in a really barbaric way by Muslims and there are all these people are saying ‘mainstream media ignoring, please retweet’ and this is spreading like wildfire. So, I go onto Twitter and say ‘hey Swedish mainstream media why are you ignoring this story?’ and they’ll come back and say: ‘well we’re not ignoring it, it’s here’ and they all send me to websites that is paywalled”. This brings a danger of leaving the gate open for misinformation to breed and ideologies to grow: “the mainstream media had sort of left the playing field, and left the playing field open to a bunch of nasty fascists and near fascists to write horrible stories”.

Without paywalls, some organisations rely on advertisement for their revenue, which Ingram says “was the original sin for digital media.” He explains, “that model encourages all sorts of bad things that it leads you into bad places trying to just get ‘reach’ or trying to get ad dollars”. While some do cave in to the lure of advertisement and making sure advertisers are happy with your content, Rudbridger thinks editors need to have a firmer stance to make sure they don’t get sucked it: “if you’re a good editor, your story is that you may be very dependent on car advertising, or petrol advertising, or whatever advertising, but that has never influenced you in any way. I think I can honestly say in 20 years of editing I never gave a thought to whether I was ever going to upset any advertisers, quite the opposite, I think the advertising director would say.”

Aside from questions about authenticity, facts and business models, what this era has given journalism, is the ability to interact and engage with readers and consumers of news. Beforehand, during the time of ‘handing down a tablet of stone,’ journalists had little engagement with audiences outside of their contributors. But now, interested, switched on and engaged ‘experts’ are willing to have their voices heard and be part of the conversation: “you have a decision as a publisher, do you want to tap into that and involve it and make journalism feel something that they have a stake in? or do you want them to remain in the position of just being a passive recipient of what you’re doing and not harness that resource?” Rusbridger questions. A colleague of his once started a column about electric cars, openly admitting he had no idea about the topic at the end of his first article. This brought him an endless supply of expertise, and he decided he wanted to “build it around them, rather than round what he thought and that became a wonderful column”.

So maybe part of rebuilding journalism and regaining trust is about putting yourself on a level playing field with your audiences and embracing the extra knowledge and input that readers can give. Ingram questions whether the answer also lies in the ability to admit when you’re wrong as a journalist, and instead of hiding corrections and retractions on the back page, openly putting your hands up to mistakes. Rusbridger agrees with this sentiment: “If we can be honest and tell you when we correct or clarify things then people are more likely to trust us”. Maybe if we can regain the levels of trust from those early days of Rusbridger’s career – with less insults to widows perhaps – the journalism industry can find a home between the pressures of fake news, an open web and debates around finances, as trust is integral to the reader/reporter relationship and repairing that is the first step in the way to reshaping the industry: “Journalism is a very imperfect thing, but it’s the best we have and if we could be more honest about it, I think more people would be willing to give us the benefit of the doubt”.