In the digital era, the boundaries of journalism have arguably been blurred. Some outlets lean towards drama, disputes and hearsay, others steer in the direction of investigation, public interest and facts. But there’s a new wave of journalism rising to the surface, one that aims to provide answers rather than leave you with more questions – Solutions Journalism; In-depth, long form articles that assess and outline how various individuals or communities have solved the problems we see so regularly occurring in our own part of the world.

Vice-president of the Solutions Journalism Network (SJN), Samantha McCann, opens this panel discussion by describing Solutions Journalism as way of learning from each other’s strengths and weaknesses to understand what we can do differently in our own communities. She believes this type of journalism is “essential to balancing the news and the front page, the lead story, and the nightly news that we see, which is usually pretty devastating”. She continues: “Solutions journalism is meant to balance that picture so that we might learn from success stories.”

Born from the ‘Fixes’ column in the New York Times, the SJN now has 155 partner newsrooms in the USA, with a variety of specialisms, from video to traditional print, which have contributed nearly 6,000 solution-oriented stories mapped on the ‘Solutions Story Tracker’, which McCann describes as SJN’s “pride and joy.” She explains how every story on this database is “read, listened to or watched by a team of taggers that make sure it meets the four criteria of solutions journalism, that it includes evidence of how this is working, that it includes limitations of this solution, where it is falling short.” 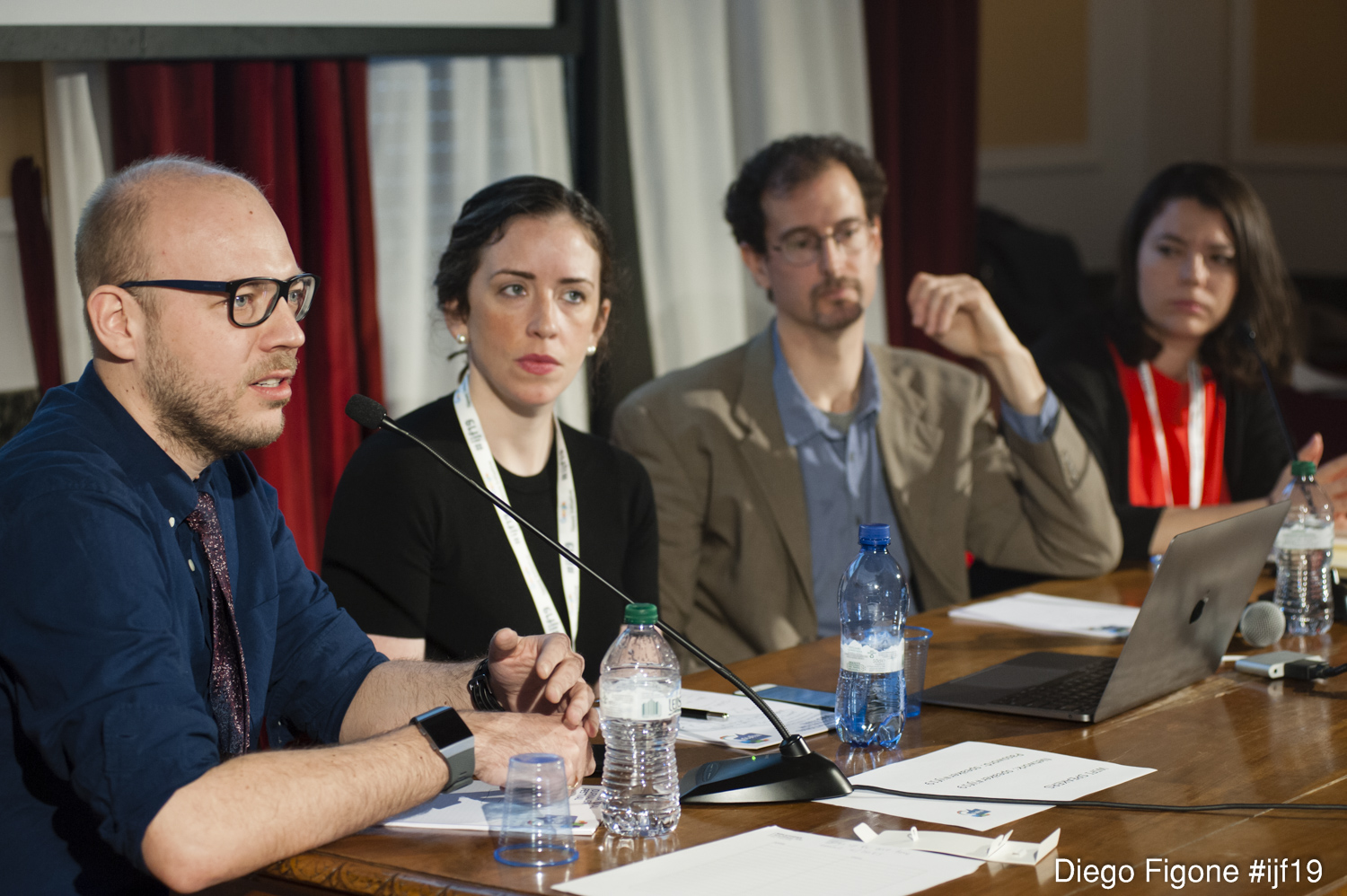 As Jeremy Druker, executive director of Transitions (TOL), takes over, he reflects on how far the Solutions Journalism panellists have come within the last year. At the 2018 International Festival of Journalism, they were given a basement room with no light and 15-20 guests. This year the Sala Priori is spilling into the hallway with barely enough seats – something Druker believes is a step in the right direction for Solutions Journalism.

Based in the Czech Republic, TOL works throughout Central Europe, where Druker believes Solution Journalism can be particularly beneficial due to historical reasons. “The distress in the media, the lack of civic engagement, all of those types of issues are especially prominent, partly because of the communist legacy.” TOL’s model is to combine inspiration, training and strategy, while offering micro-grants to journalists with a story pitch and a budget who may want to get involved, but don’t have the financial or editorial support to pursue it themselves. It also gives them the opportunity to have mentoring session where they can learn the foundations and structures of the genre. “You can be the best journalist but it many ways it’s a different way of doing journalism, or at least a different way of thinking”, comments Druker.

But while Solutions Journalism customarily focuses on answers, TOL’s male suicide series by Nejsi Sám broke that mould as a “special case”, with the first article in a collection of four outlining the context of the problem, as male suicide was not well acknowledged in the Czech Republic at the time of publication. The series gained a lot of attention and readership. The health ministry, who had previously refused to take part, began calling them to ask about more solutions they’d come across.

Druker acknowledges that there’s a lot of uncertainty about whether reporting on solutions can work to improve society: “we’re still a bit early to see where the public discussion leads, but hopefully, as in the US, it will lead to greater civic engagement, people putting pressure on their political leaders to actually do something after these stories come out.” He also believes the key to success for implementing Solutions Journalism is patience, continuity and building trust with journalists, something Jakub Gornicki agrees with.

In Warsaw, Poland, Gornicki co-founded Outriders, a start-up that “covers global topics which have local impact.”  Outriders partnered with Ashoka Poland to launch the Solutions Journalism Project, partly because they wanted to teach their own journalists how to cover solutions stories, but also to inspire discussion and impact which has become increasingly difficult: “our political debate is very polarized, it is very partisan, and that touches also a lot of media, which basically creates this situation where one side is shouting at another side: ‘I’m right, no I’m right, you know I’m wrong, you’re wrong’ and that is very little room for actual debate”.

The organisation also believes that journalists should work towards binding society, rather than disconnecting it. This is why they decided to work with Ashoka on the Solutions Journalism Project. After first having a closed call selection of stories and creating ‘buzz’ around that, Outriders decided to have an open call, which Gorincki thinks allows for “serendipity chance” and finding people attracted by Solutions Journalism. So far the stories have included solutions on a legal high epidemic, false claims on communist era building and mass tourism – one he quips the people of Perugia should have a read of if they’re fed up of thousands of journalists taking over the town each year. He also noted how lonely elderly can be put in touch with orphans who lack contact with adults, combing a solution for two social issues.

Sorana Stanescu works as the managing editor of her organisation Decât o Revistã (DOR), based in Romania, and they have a mantra from Joan Didion: “We tell ourselves stories in order to live.”  At DOR they start everyday with this in mind, and while they may be relatively new to the solutions landscape, they believe they have the world at their feet, and are deeply committed to bringing Solutions Journalism to their country: “our plan was to cover modern day Romania and to cover basically the stories and themes that concerned people like us”

Stanescu believes that what DOR does best is telling stories in a narrative format, so in addition to providing mini-grants and pop-up newsrooms, they host live storytelling events to audiences of 900, which she describes as “humbling,” since every event so far has been sold out. Focusing on what their Powerpoint described as “character-driven, public-powered, solutions-oriented journalism,” DOR want to display how newsrooms can start a trend with impactful stories. However, they are careful with what they officially label a solution story because, while they want to start the trend, they don’t want to get it wrong. They are keen to get across that Solutions Journalism “should not be about the problem, but about the solutions, and they are not about future plans or good intentions, and they are not about campaigns”. 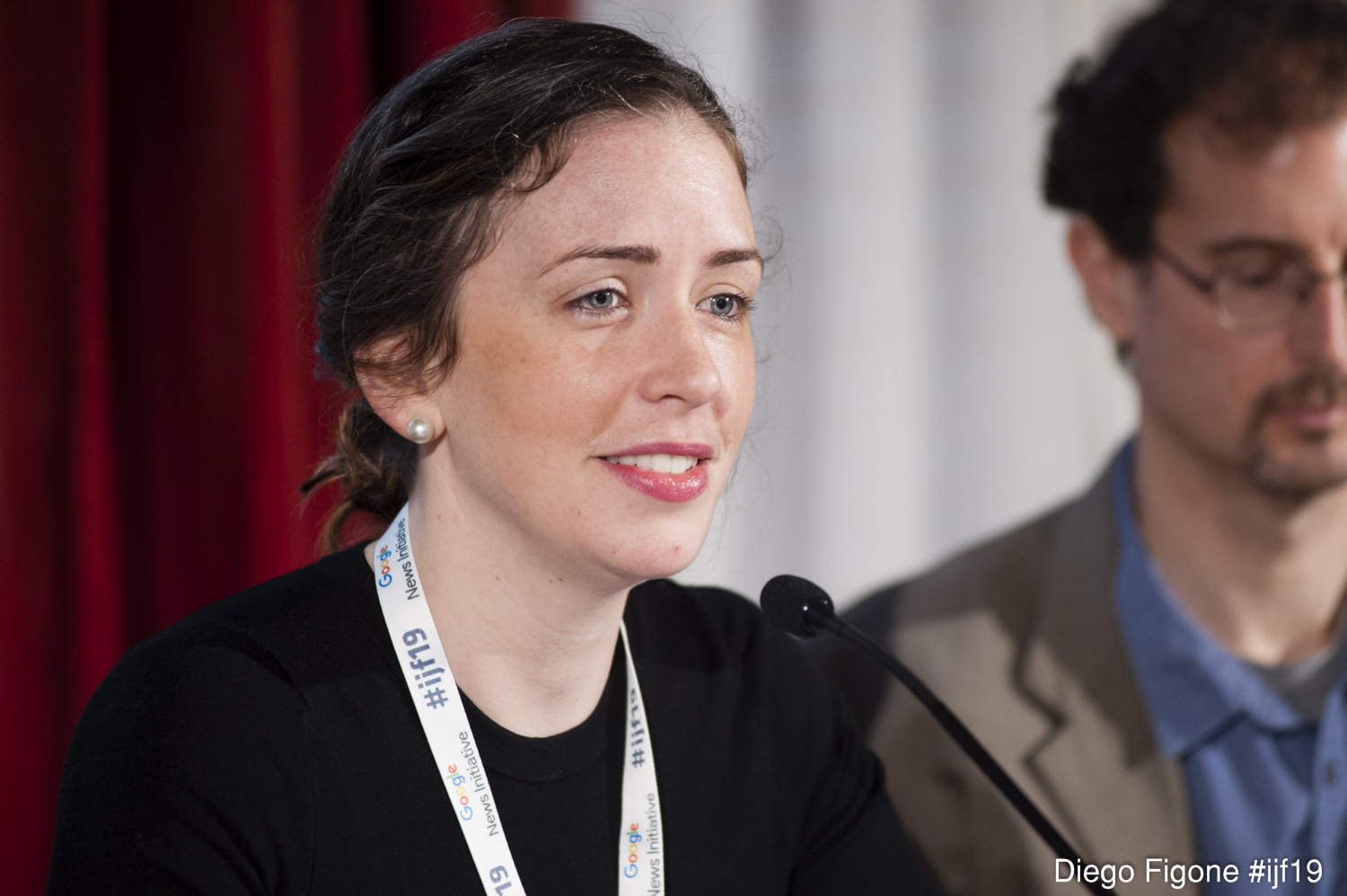 As they moved on to the discussion part of the panel, McCann re-iterated how Solutions Journalism was born from wanting to “moving the conversation forward,” and reacting once you know something’s an issue, rather than continually reporting on the same problem time and time again. She then emphasizes Stanescu’s point about Solutions Journalism being a matter of starting out slow and small, but explaining that the Solutions Journalism Network started out as 12 stories, which grew into the nearly 6,000 they have now as they began “establishing new journalistic norms” in their partner newsrooms across the United States.

In Europe, Gornicki believes a large barrier in the way of making Solutions Journalism common practice in the newsroom is often the way that editors react and their displeasure at throwing out the blueprints: “we had sometimes ideas of editors like: ‘well this is a great story, but what if we would cut out the solution part of it?’” For this reason, they want to make sure everyone is on the same page before grants from Outriders are distributed.

His fellow panellists agreed that this is a significant challenge, and that a way to combat that is by having competition from other outlets to push newsrooms towards more creative approaches. Stanescu said: “when you have strong competition, when you fight not only for funding but also for attention and readership, then you’re more keen on working harder, being more aware of the trends and what’s going on in the world and what we should, could do better and more.”

Before rounding up the discussion, the panellists reflect on the areas of improvement that Solutions Journalism could benefit from, which include training journalists to submit pitches that include research and encompass the solutions benchmark. Druker acknowledges that some people may just be slightly misinterpreting the idea: “too often, people get fixated on a problem and they really want to solve that problem, but they don’t do enough homework about solutions somewhere.”

At its heart, Solutions Journalism is about showing people that something can be done, and where we can begin the process of following in others footsteps. In a world of increasing division, Solutions Journalism can be a way of bringing people together through collaboration, in hopes of creating a better world which focuses on overcoming problems, rather than dwelling on them.