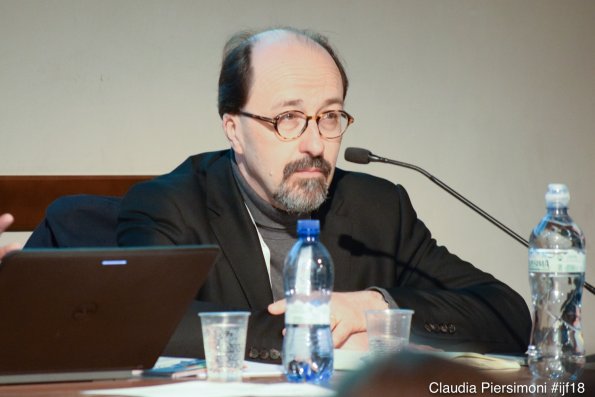 On September 15, 2008, Lehman Brothers filed for bankruptcy. It was the first domino piece to drop in what would be a financial chain reaction that hit markets around the world and led to the Great Recession.

The financial crisis not only had disastrous economic effects but it also impacted the public’s trust in media. Many critics questioned whether financial journalists had done enough to dig into the misdeeds of the financial industry and to warn the public about the impending crisis.

As we come to the 10-year anniversary of the apex of the crisis, has financial journalism changed? Bill Emmott, former editor of The Economist from 1993 to 2006, shared his thoughts as part of the “Follow the money: how the crash of 2008 changed journalism worldwide” panel. In an interview after the discussion, he shared his thoughts on journalism leading up to the crisis, lessons learned and what challenges lie ahead for financial reporters.

IJF: How would you assess business and financial journalism’s coverage leading up to the crisis? Did the media adequately cover the warning signs and banking misdeeds?

Emmott: I think that right up to 2008 the media behaved, generally speaking, similarly to what was done in previous booms and busts in Japan in the late 1980s, in Southeast Asia and other emerging markets in 1997 and 1998, and the run-up to the tech crash. In other words, the media did put up warning signs, but those warning signs got drowned out by the media becoming one of the cheerleaders for the boom. In other words, becoming believers —as the former chief economist for the IMF Ken Rogoff put it — that “this time is different.” This is the key delusion that leads to kind of excessive bubble and bursting: the belief that this time is different. And the media is always a part of that process, I’m afraid. So I think the media was part responsible, but it shouldn’t be the only one held responsible. It was part of a general atmosphere.

IJF: What lessons do you think financial journalists learned from the crisis that are playing out in reporting today?

Emmott: I think journalists have become sceptical again. They’ve become more disbelieving and they’ve become more convinced of the need for some punishment of people in the financial industry for what was done. I think there should be greater noise from the media calling for tougher regulatory penalties, tougher investigations, tougher responses to what happened because it was of such a magnitude and reflected the capture of the political process behind the financial sector.

IJF: What are the biggest challenges facing today’s financial journalists who are trying to make sense of the economy and potential future crisis for a broad audience?

Emmott: I think the biggest challenge is the business model of the media itself. The loss of revenue to the tech business, particularly Facebook and Google, and the disrupting of the advertising model. That, along with the move of publications online, has led to a metric-based and often a click-based incentive structure which produces very short-form entertainment type of journalism rather than investigative or challenging things. I think that editors and editorial teams are going to react to that, and I think that business models are moving toward a more sustainable, subscription-based model, but I think at the moment the combination of that digital incentive with the loss of revenue that is making it harder to invest in time-consuming investigations means that financial reporting is not back where it should be.

Note: This interview was edited for length and clarity.