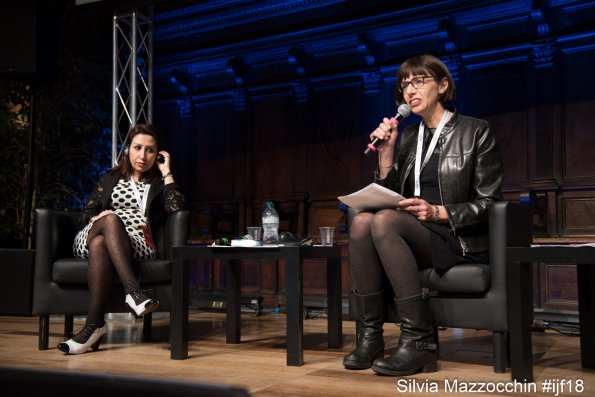 In a packed Sala dei Notari the audience of the International Journalism Festival listened with bated breath to the panel “What’s left of the Syrian revolution?”, an all-female panel moderated by La Repubblica’s foreign correspondent Francesca Caferri. Caferri was flanked by Donatella della Ratta, a journalist and writer who lived for more than ten years in Syria; and Noura Ghazi Safadi, an international human rights lawyer named in 2018 Amnesty International’s list of 8 inspiring women defending human rights around the world. Standing silent and invisible among them was the real protagonist of the event: Bassel Khartabil Safadi, Noura’s late husband and della Ratta’s best friend.

Safadi was a Syrian free speech activist sentenced to death and then executed by the Syrian regime in 2015.

Before discussing the impact of current events on their personal lives, the panel delved into a discussion about the war that has been rocketing Syria over the past seven years, talking about the concrete risks of witnessing a Third World War – a war which led to 500,000 deaths and 65,000 people locked away into Bashar al-Assad’s prisons.

Half of the population is now displaced, both inside and outside of Syria. It remains an extremely tense situation, with no certainties regarding the future, but Caferri said “we don’t want to tell you about what will happen in a few hours or days,” adding, “We want to go back in time and tell you about what happened, what this country and this revolution were before becoming a civil war, a major foreign political crisis.”

March 2011: a peaceful protest takes over the streets of Damascus, bringing together people from all backgrounds regardless of social status or religion. Della Ratta remembered the enthusiasm, hope, and courage of the young people shooting and documenting the revolution – thus the title of her book “Shooting revolution” published earlier this year – risking their lives for a greater cause: the chance to win the self-determination of the Syrian people. She highlighted how filming was perceived as the worst crime because it gave a living and shareable evidence of what was happening.

A proof that turned into a betrayal for the government but also a form of agency for the people prepared to die to pursue equal justice for all, and to see those who had been arrested being given the right to have a lawyer and call their family.

This is the reason why, together with Bassel, della Ratta promoted the use of social media and film to fight against censorship and arbitrary detention in order for Syria to achieve the rule of law and dignity for its population.

Dignity was indeed the keyword of the whole panel. As Safadi maintained, “In Syria, we accept any kind of violence against us: killing, arrests, disappearances, sexual violence, forced replacement. We are under all the things and we are still standing because of our dignity.”

She added that the Syrian revolution was not to be intended as a civil war, but an international war: what is currently taking place is an open war against everyone and everything, where the only ones paying the price are the civilians.

The daughter of a political detainee, Safadi charmed the audience with her open conversation and her passion for defending her people from what she believes is the major issue in Syria: arbitrary detention, a fate which binds together both her father and her husband. Forced to leave the country because of her activism, she said she “won’t give up” because that’s what she promised to Bassel. Before his execution he told her: “If something bad happens to me, go on with our dreams together, go on with the dignity of our country, you are the only person to continue after me.”

Animated by the will to achieve rights for her country, Safadi is now the head of an organisation helping Syrian families getting information about their loved ones who were arrested because. She said: “I don’t want any Syrian to have the same position which I live in now. I dreamt for years to just have my wedding party and to wear my wedding dress but they simply killed my dreams because my husband was a peaceful activist and refused the armed revolution, he refused extremism.”

In her opinion, Syria has “no choice but to go on”. What is needed though, she maintained, is a new revolution, a “revolution against everything, against those people who are betraying humanity”.

As for della Ratta, she believed that if, on the one hand, the Syrian revolution had led to a war of immense proportion, it also sparked a flowering of the arts which is the reflection of a legacy of dignity: “In 2011 the Syrian people discovered their own dignity and we cannot take it from them.”

She concluded saying she couldn’t help but respect the Syrian people, adding that people need to remember that refugees don’t need charity: their life experience doesn’t only revolve around death and destruction, but pride, courage, and, once again, dignity, which needs to be given back to them to prove lives were not lost in vain.