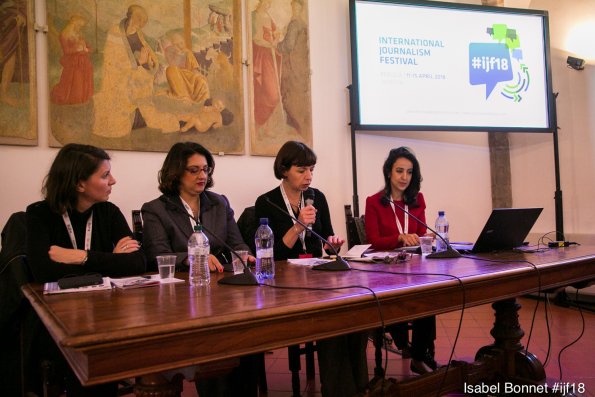 Located at the southern end of the Arabian peninsula, Yemen is considered to be its poorest area. If this wasn’t enough to haunt its people’s lives, the country is wracked by an ongoing war which saw its beginning three years ago and won’t probably see its end in the short term. Houthis and the Yemeni government are fighting fiercely in a conflict that is the cause of one of the worst humanitarian crisis of the last decades, with more than 40,000 casualties, an average of 130 dead children everyday, more than 3 million people displaced and an overall lack of food and medicines which further burdens the life of the Yemeni citizens.

Due to its particular situation, it is extremely difficult for journalists to enter and report from Yemen, especially if foreigners, thus the difficulty for the Yemeni case to feature widely in media.To give the public an insight into what it means to be reporting on what was branded as the “forgotten war” the International Journalism Festival hosted a panel which confronted the issue from three different points of view and walks of life, that is those of Nawal Al-Maghafi, Laura Silvia Battaglia, and Iona Craig. The event was moderated by the award-winning foreign correspondent of Italian daily La Repubblica, Francesca Caferri.

As soon as the first speaker, Nawal Al-Maghafi, started sharing her experience, the audience was brought into the heart of the issue. Yemeni by birth, Al-Maghafi works as a BBC correspondent and has been reporting extensively about her country helped by the fact that she can both enter it freely and blend in effortlessly.

“In comparison to foreign journalists, it is particularly easy for me because I can just swoop into Yemen [with] my Yemeni passport and get through all the checkpoints. I cover up with my niqab and headscarf. I go through all the checkpoints just like any other Yemeni civilian. I mean, the risks at that point that I face are the same risks that any other Yemeni civilian faces on the ground but,” she said, “that’s where the ease of this for me stops”.  Al-Maghafi added that she is particularly burdened with a feeling of responsibility: working with local people as part of her team, her fear is to sentence them to terrible consequences just because they helped her covering sensitive issues.

This poses an ethical question: what do you do when your reporting endangers the people working with you on the ground? Not an easy question to answer, but ways can be found to protect those you love or care about. Battaglia, a freelance journalist who lives between Yemen and Italy, is married to a Yemeni man and therefore feels tied to a Yemeni family, which she describes as almost a ‘tribe’. Her personal decision was “to report in Italian from both sides, [because] it’s a language less distributed, and less known and reporting in anonymity about situations that can create problems to my family in the areas where my family lives.”

She also emphasised the problem about sources: as a woman, she doesn’t want to put her family in danger by using them as sources, and as a journalist, she cannot simply do that because it’s her “duty to choose the right sources so not just random people living in in the streets”.

The only international journalist to repeatedly cross the front lines to report on both sides of Yemen’s ongoing conflict, Craig opened her keynote speech reaffirming how difficult it is for foreign journalists to enter the country, with some reported to have tried via extremely to bypass closed borders through expensive boat rides departing from Djibouti. In her personal experience, connections are crucial: she built relationships with people living and working on the ground in Yemen over many years who knew people on both sides, so she never stayed in hotels but at her friend’s homes and reporting was made easier.

As we can gather from the impressive experiences of these three journalists, local people are key but are also those who have been most affected by the war. Already considered the poorest country in the Arab world, Yemen is currently undergoing a humanitarian crisis which sees an extreme lack of food (80% of food used to come from outside Yemen) and medicines, thus leaving people with kidney problems, cancer, or even just less severe illnesses to die. Poor infrastructure represents another huge issue and a serious obstacle to the transport of the few resources actually available.

Will this conflict end any soon? Al-Maghafi seems quite sceptical about it: “It’s impossible for either side to have a complete military victory on the ground and it seems that both sides are waiting to have the complete military victory before they’re willing to kind of back down and find a diplomatic solution.” In fact, if on the one hand, the Houthis are reluctant to give up the power they’ve gained over recent years, the Saudi won’t just accept a UN solution: both of them are basically trying to find a solution that won’t ruin their reputation. In the meantime, thousands of people are dying and suffering, and not even the media is giving enough attention to the problem.