As a continuation of the discussion from the previous years, particularly the talk with Noura Ghazi in the panel – ‘What’s left of the Syrian Revolution?’  during the International Journalism Festival 2018, the talk ‘Memory and Justice: The Case of Syria’ moderated by Francesca Caferri, a foreign correspondent for the Italian daily La Repubblica, included as panelists Anwar al-Bunni, Syrian Human Rights lawyer, Hadi Al Khatib, founder of The Syrian Archive, and Sara Afshar, founder of Afshar films and producer of documentary  Syria’s Disappeared: The Case Against Assad. 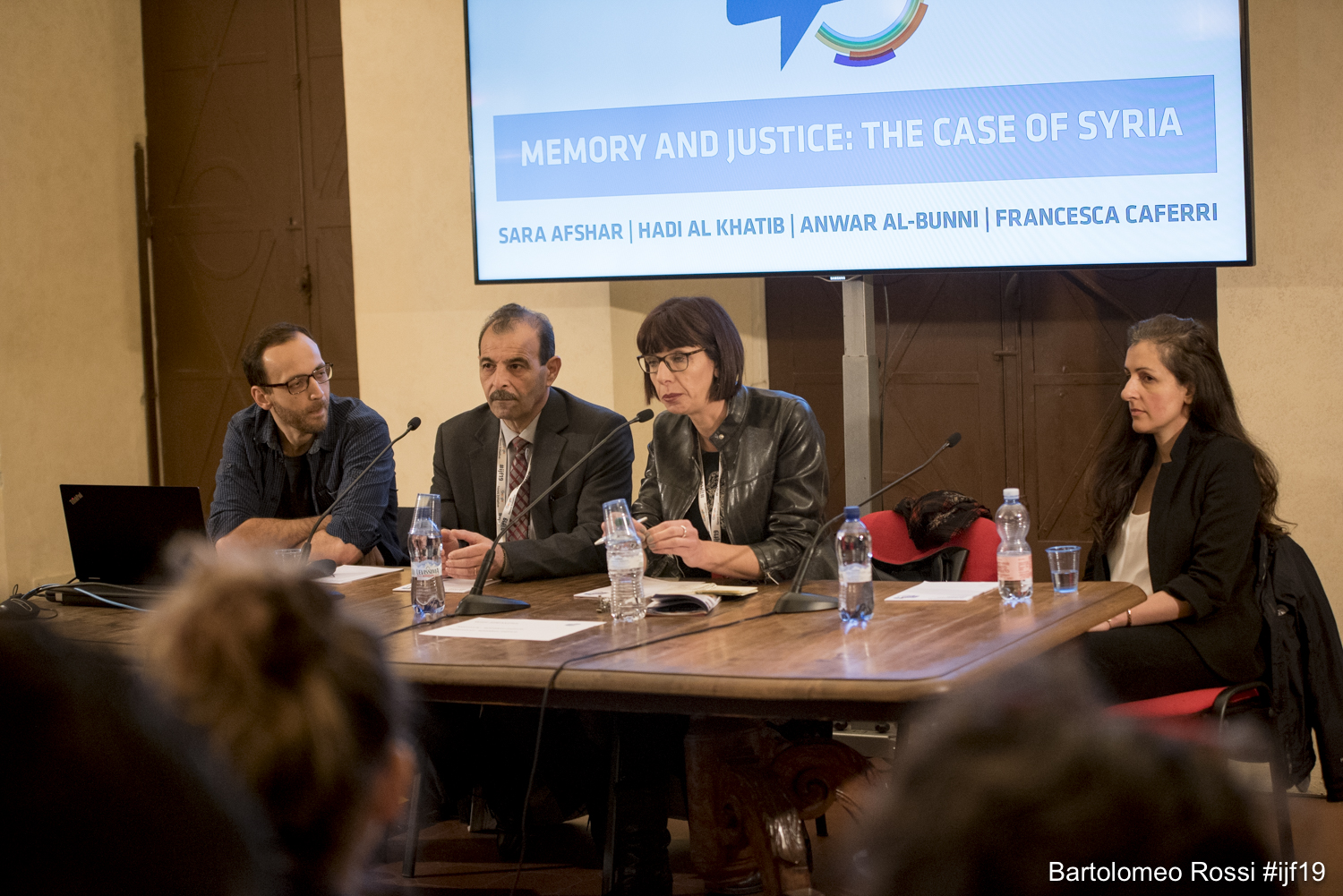 Francesca asked an important question at the start of the panel about the end of the war in Syria. Can one really consider the war to be over yet? Some, including Francesca herself, believes it to be true, but there are others like Anwar al-Bunni, who would argue against this sentiment of the war being almost over.

Al-Bunni, being from Hama, has been on the receiving end of brutality and attacks from the Syrian regime headed by Bashar Al-Assad, because of his actions such as speaking up against the human rights violations committed by the regime. He presented how the war criminals around the world feel that they can escape from the punishment for their crimes due to the lack of an effective justice system or examples of criminals penalized for war crimes. He explained how he believes that what happened in Syria and what could happen still can have direct impacts on the situation of immigration in Europe. He believes that other people who believe in dictators are looking at the destiny of Syria as an example. If the Syrian crisis can send one million refugees to Europe, similar impacts in Turkey or neighboring countries will send people to Europe and not countries like Sudan or Libya to name a few. He concludes his point by reminding people that accountability for Syria from Europe can set an example for others in the world and save the future of not just Syria but also the rest of the world.

Al Khatib brought to the forefront the idea of memory, preserving an archive of the events that followed, and of how this memory archive can act as evidence in international court cases and the challenges faced by them while trying to do so online. Since it is an online archive, the complications which accompany it are not just the common challenges of storing massive amounts of content and footage of the war. One should also note it was the first revolution to be streamed online with over thousands of hours of footage uploaded on online platforms like Facebook and YouTube. The three major challenges faced by The Syrian Archive were highlighted to be the seizing or damaging of the physical devices at check points and borders due to hostility against their work, cyber attacks on media houses and deletion of videos through automated flagging systems. The first two being mainly the result of them presenting a truthful narrative of the events which does not concur well with the current governmental regime, and the third one being a result of the artificial intelligence soft-wares’ being used by the platforms to moderate the data being uploaded online.

Al Khatib elaborated that 7,845,400 videos were deleted by the machine learning systems as they showcased the war situation and were considered as propaganda, making them inappropriate for the platform. However, they are able to get the videos back online, if they are already in possession of the meta-data of the videos and the content presented. The archive also ensures that the information is verified properly and currently, prioritizes saving the information before it gets deleted. He also clarified that “it’s important for the future for any legal case as well as for constructing the collective memory of society that is all mainly right now digital.”

Afshar continued the discussion to remind the audience of the importance of remembering the true narrative of the events that had unfolded and introduced the theme of the documentary made by her, Syria’s Disappeared: The Case Against Assad. The documentary, made with non-political, intentions, yet now a potential political tool, tells the story of the tens of thousands of people who disappeared in Syria into a network detention centers. Afshar mentions, how, for her, the Caeser Photographs are reminiscent of the Holocaust due to the signs of severe torture and brutality on the bodies of the people. She elucidated how the corpses photographed do not even have names attached to them but the number of the detention facility where one could find the body. For her, this level of torture is the same as the holocaust during the Nazi regime, except that in this case there is no justice being served.

She also told the audience stories of the kind of torture families of those detained and the detainees were forced to face. She gave an example of the kind of torture mechanism used to force the detainees to give a false confession. She further mentioned two organizations which have been trying to help the cause but with little to no result, namely Amnesty International and Families for Freedom. While the motion to refer Syria to International Criminal Court was vetoed by Russia and China, the panelists place their hope on Universal Jurisdiction laws followed by some European countries including Belgium, Finland, France, and Germany. They believe that they will be able to build a case against the criminals using legal evidence and get justice through this system.

On a closing note, Al Bunni maintained that, “Terrorism, that’s our enemy, all of us”  and emphasised how emigration is dangerous for the refugees as well. He believes that when victims don’t find a peaceful way to get justice, it lays the ground for radicalization which often leads to terrorism, which is why it is important that the victims in Syria get justice. He continued that nobody can fight the idea of terrorism, yet we can avoid and stop people from believing in the idea. He ended the talk with a rather interesting claim, “It’s not spring for Syria and Arab world, it’s spring for whole world, in fact.”