The Meme, journalism and visual misinformation discussion came as a continuation of last year’s panel at #IJF17 and saw Jennifer 8. Lee, co-founder and CEO Plympton, moderate a conversation on how images circulate in our meme infused -and confused- world, debating alongside An Xiao Mina from Meedan), Connie Moon Sehat who is the director of NewsFrames Global Voices and Farida Vis, director of the Visual Social Media Lab.

Farida Vis started her presentation with a project that actually arose from last year’s panel, a collaboration with First Draft got a better understanding on the part they play in the media environment. As we are constantly overwhelmed with imagery, misinformation can spread a lot faster through pictures, and the need to understand how and why that happens was pressing. The research managed to differentiate 21 types of images used during the campaign, taking in consideration various decisive factors. It also expanded the initial 7 types of misinformation to 10, ranging from inaccurate or accurate humour, all the way to fabricated content, false connections, false context or exaggeration to name just a few. Their most significant finding was that the “false context imagery” occupied the top percentage in this rank. This aspect made their work very hard, as algorithms could not correctly trace situations in which the image itself is not the issue, but the context is, and that needed interpretation. As the full report is due in a few weeks time, Farida Vis also announced that she’ also planning new research on the theme. 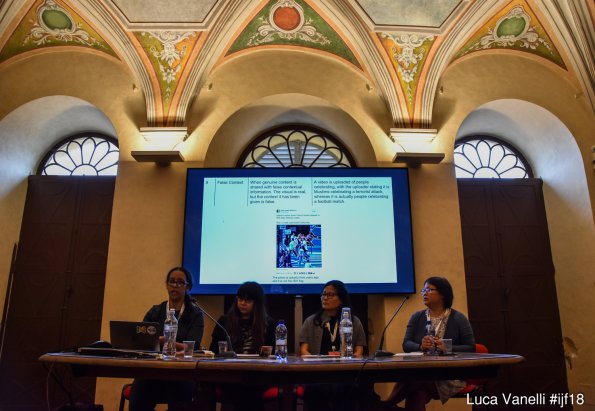 An Xiao Mina, technologist, writer and artist, went on to discuss politics and fandoms and the importance emotions play in both areas. Mina recalled the “Oprah 2020” moment, in which the internet exploded with memes proposing Oprah Winfrey as the new incoming president of the United States. She pointed out that even if we’re talking different sets of values, the branding and the omnipresence they both exude connects Trump and Oprah to the same kind of communication and engagement with their public.

“We need to start taking Kim Kardashian, Grumpy Cat, The Walking Dead more seriously to understand why are these types of media really popular and how are politicians, how are people engaging in politics leveraging these techniques and what we can learn from them”

Furthermore, she added that the duo of “fandom” and “anti-fandom” lie at the roots of present online interaction, both when it comes to celebrities and politics, and so Trump has adapted his communication style in a way that meets the requirements of a reality star, always present in the media.

Drawing a parallel with the popular show The Walking Dead,  Mina pointed out that the same notion used with trailers and teasers, -leading up to something- is heavily used in the president’s narrative. “You pull attention rather than pushing agendas,” Mina said. It comes as little surprise, in this new narrative climate, that the most searched for topics of 2017 were the Women’s March followed by the infamous “cofveve”, the typo-turned meme posted by president Trump on Twitter. So in this context of transmedia and engaging audiences on a powerful emotional level, there is a need for journalists to understand these emotions better, and to be able to frame a story accurately and to capture the nuances. 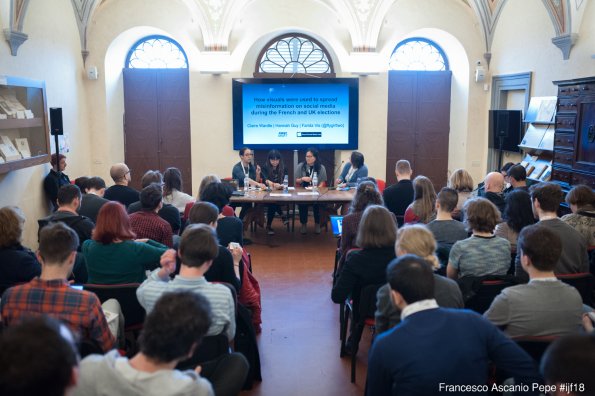 Connie Moon Sehat took the discussion forward by showing the maps these memes draw, tracing the images while they get to circulate large numbers of countries, in circles of remixed information. The example she pointed out was one photo taken from the tanker accident that took place in 2010 in the Democratic Republic of Congo, where over 230 people got killed. The same picture travelled the internet to describe multiple events (for instance it circulated in Nigeria in 2015 and Myanmar in 2016) that happened in over 20 countries around the world. The image kept its cyclical movement (a movement that was challenging to follow using algorithms), and Sehat emphasised how the same information got recycled to a point in which it became grossly misleading, even with the best intentions on the part of the users who mostly wanted to show their sympathy or wanted the story to be told.

Returning to the topic of emotions, Farida Vis also showed how many of the images used to misinform played on fears and imagination. That imagery tries to push emotional buttons easy to reach in any given society (terrorism, crime, minorities); again, this very emotive aspect makes it a lot more difficult to be traced in all its complexity using algorithms. The discussion went ahead with Xiao Mina urging journalists to explore the emotional background that has so much to do with the current rhetorics. She recommended to develop a more sophisticated understanding of the mechanisms that can lead to being disruptive or constructive; also the broader aspect of memes was touched, as they represent an expression of an underlying, complicated situation that can and will be used negatively to produce misinformation or to trigger strong emotional response. Their message was loud and clear: the things we tend to treat too lightly, such as memes and other internet phenomena, can and will be used against us by groups and political visions that no longer can be ignored. It is a situation that needs tackling and moreover, studying, to better understand and apply this new way of communication.