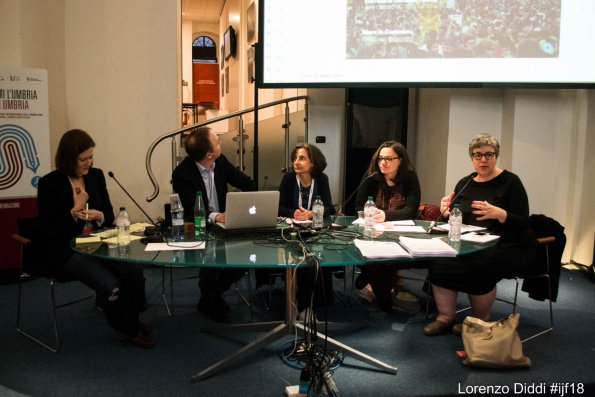 What’s the first thing that comes to your mind when thinking about the word “immigration”? This question, posed by Annmarie Benedict, executive at the “Social Exchange Initiative”, set the tone for the panel discussion “Public opinion and the immigration crisis” hosted by the International Journalism Festival in Perugia.

Main characters of the talks, other than Mrs. Benedict, were Tom Dixon, co-founder of “More in Common”; Chiara Ferrari, who works for Ipsos Public Affairs; Marina Petrillo, senior editor at Open Migration; and Antonella Napolitano, Communications Manager for the “Italian Coalition for Civil Liberties and Rights (CILD)”.

Over-used and abused, “immigration” is a word that inevitably evokes pre-existent ideas and concepts in people’s mind, each one different and depending on their respective backgrounds. In fact, talking about immigration is impossible if one wants to avoid those prejudices that define and surround the topic, especially because media fostered them.

As Dixon suggested, the most common feeling on the topic is anxiety: Western democracies are facing a difficult time and, as a consequence, their societies are less able to deal with the impact of change caused by the refugee crisis than they were one or two generations ago. Society is being pressured by a number of elements such as economic uncertainty and instability and the feeling of displacement in a globalised world which again causes a perception of threat towards national identity. This is further enhanced by the perception of society’s division caused by terrorism, and the flow of new narratives coming to the media stream from social media, not to mention the loss in trust in government.

All these elements together foster a sense of threat and insecurity while showing how “our societies are not as resilient as they need to be.” Dixon suggested societies need to understand these realities and how to overcome them in order for an inclusive society to be built.

But the thing is that popular perception and reality often aren’t the same: a report promoted by the Social Exhange Initiative and More in Common presented during the panel found out that “the connotations of the general population are way more nuanced than we give credit for, that we hear talked about in the media and that they’re less polarised than you’d think.”

In fact, it’s usually taken for granted that public opinion is extremely polarised as if its spectrum was reduced just to the extremes, neglecting the whole area that can be found in the middle. The study addresses that very “middle group” area often referred to as the “maggioranza silenziosa” – the “silent majority” – by Italian media.

This “middle group” is actually quite large and includes almost half of the population. Its members are usually people less engaged with current affairs, who don’t consume and share news on social media, thus condemning their view of the world to be shaped far more by emotion rather than reason.

But people often hold confusing, at times conflicting, opinions which give others hope when it comes to immigration: it is possible and proper to address the “middle group” with reliable information in order to create an inclusive community designed to meet the needs of both national citizens and immigrants.

It was extremely interesting to note how the study found how varied and nuanced European public opinion is, whose “middle groups” count around five sub-groups, every and each one with its specific needs and views. The report also suggested that the Italian “maggioranza silenziosa” is even more nuanced than its European counterparts, counting seven groups: a true kaleidoscope of views, a reality that doesn’t really emerge from the regular media outlets.

The analysis offered by Ferrari was particularly compelling considering the results of the latest Italian elections. Talking about the Italian “maggioranza silenziosa”, she outlined the main components of this group: the Italian cosmopolitans, the Catholic humanitarians, the disengaged moderates, the left behind, the security concerned, the cultural defenders and the hostile nationalists.

Ms Ferrari told the audience that this group is usually made up of adult and mature people, with a low level of education and working low-skilled jobs. They consume lots of TV programs, which lead them to believe immigrants to be these dark-skinned men, ready to commit crimes. If we consider older people, the left behind, on the other hand, we can find a different nuance in their opinion: they consider themselves quite compassionate and respectful, but since they were deeply affected by the economic crisis, they’re seriously anxious about unemployment and the effects deriving from immigration, thus their aversion to it.

Ferrari’s analysis suggested that most views held by public opinion when it comes to immigration were influenced and impacted by the narrative adopted on the issue, and not by real facts.

But how can we address this “middle group”? Is it possible to give them reliable information in a way that emotion-driven information doesn’t sound more appealing?

Dixon gave the audience a few ideas on the matter, firstly underlining how “to shift the debate, we need to build an inclusive sense of identity that is stronger than the other ‘othering’ narratives”. But how? Dixon suggested that advocacy needs to speak to people’s values, including the traditional moral foundations of their national identity, such as the respect for authority, loyalty, fairness, and sanctity.

How can we build a more inclusive society? The first step is to build an inclusive public discourse first that allows people to escape the binarism which chains political (but not only) speeches in dualistic categories: racist/cosmopolitan, black/white, good/bad.