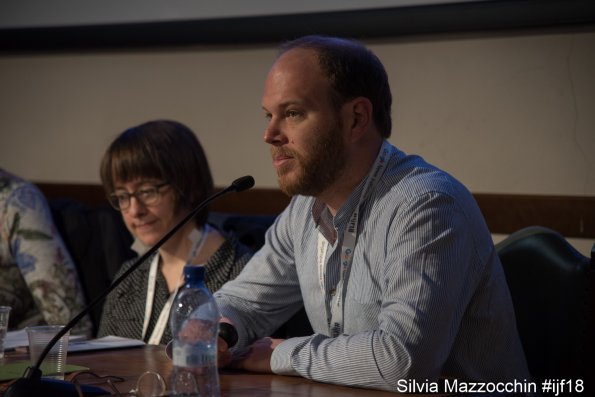 In the panel Finding common ground through community-minded journalism Philip Faigle from the Zeit Online presented the project Deutschland Spricht and it’s international follow-up project My country talks – the outlets’ answer to growing polarization. They matched the participants to meet up with a person from their neighbourhood, holding opposing political views. Tinder for political debate, 1.200 people met up on the day of the event past June. The result was a huge number of selfies popping up in Die Zeit Online’s email account by participants who had met up to discuss questions such as: ‘Has Germany accepted to many refugees?’, ‘Should Germany abandon the euro and return to the mark?’ or ‘Should homosexual couples be allowed to be married?’. Now the idea spreads around the world. Philip Faigle tells us why other outlets should join the project.

How did your audience respond to Germany Talks?

Our readers were very willing to participate, we got a huge response. 12.000 people had registered after four or five weeks. There was a lot of positive feedback before the debates happened, lots of people writing: Cool, lets do it. After the event a participant wrote to us: “I can’t remember, when I sat down for the last time for two or three hours and talk about politics. Not by accident but really with the purpose of talking about politics”. After the event, we had lot of feedback coming from very far, like Argentina and we had to give interviews to Japanese newspapers. And then it was a nice incident that Google said that they would fund this as an international platform. We don’t earn money with it. There is no business model behind.

But it strengthens the relationship with the audience.

Of course, there are positive effects. One for example is, that you get a better sense about how political opinion is distributed among your readership. In Perugia we talked to a lot of journalists and some of them said that they had actually no idea how their audience would answer the question “Are there too many refugees in our country?”. Is it 50-50? Is it 70-30? Deutschland Spricht is a nice way to get to know what your readers think. And it’s a good way to involve your readers. All of the participants are very committed people. They are interested in what you are doing. They are very worthy contacts for your newsroom.

To which changes is Zeit Online responding with projects fostering community engagement?

Faigle: Modern media are no longer just a sender of information but also platforms for readers. That is what we want to be: more and more a host for debates, for good ideas. We also have a new festival Z2X for young people in their 20s to meet up and pitch their ideas for a better world. I personally believe in this real-life component, it really makes a difference if people meet each other online or if they meet in real life. One of the strongest features of Deutschland Spricht was that people get into direct contact.

Will you continue to work on Deutschland Spricht?

Faigle: Now our goal is to initiate those face-to-face-discussions all around the world. We are building up – together with a lot of international partners – a platform called “My country talks”, that will enable media outlets and institutions around the world to match up people with starkly opposing political views in the same way we did. We will launch the project this summer. A lot of media partners are already involved, for example The Globe and Mail (Canada), Morgenbladet (Norway), La Repubblica (Italy), Politiken (Denmark) as well as ARD aktuell (the German public broadcaster ARD’s primetime news programs). We are still looking for partners, and hoping that our project will help to initiate debates in many areas in the world.