The panel Fighting back: how should journalists respond against attacks online?  offered insight on the challenges and dangers that journalists face both on and offline.

John Nery, associate editor at Philippine Daily Inquirer moderated the discussion that included Tirana Hassan, director of crisis response at Amnesty International and Hannah Storm, director of the International News Safety Institute Nery noticed that the subject of media under attack had become a category in itself at IJF 2018, with more panels every year. He then crunched the numbers from“Defending Journalism”a publication covering 10 years of analysis on safety and various practices to protect journalists. Nery concluded that the situation worsened over the last year and a half.

Tirana Hassan started by sharing her extensive experience on the subject, as someone who has not only worked with humanitarian organisations but has also spent 15 years living and working in war zones, investigating human rights violations. 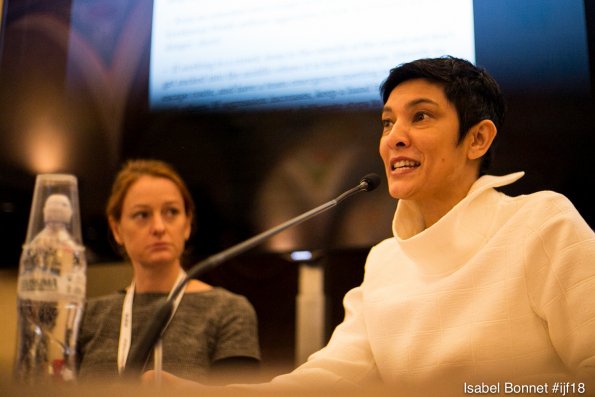 ”When there is an assault on journalism there is an assault on freedom of expression,” she said; “this makes the intersection between human rights and journalism one that is particularly acute when it comes down to threats on journalists and news organisations “.  The best way to fight back according to her is to be prepared, prevent, and manage risks, and not just for journalists, but for any team of people involved in the investigations – whether it’s drivers to interpreters or fixers.

Hassan described the routine of security meetings at Amnesty: not rocket science but a discussion on what can go wrong and how and how to avoid that.

Speaking about  online harassment, she pointed out how the very conception of it being something you can easily brush off is very much on the wrong side of things.  That concept eventually leads to journalists being silenced, censored or even deciding to quit their profession. Not only is there a need for reviewing security protocols and studying what is the emotional impact of this type of harassment, but foremost, “we need to demystify the idea that we are all tough as nails”, that this is in any way typical or part of the job, so a shift of perspective and culture is required. 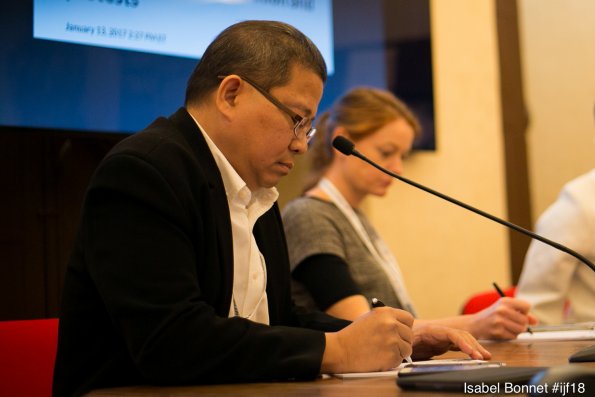 Other practical things she advised were actually to use online threats are indicators, to search for clues in online articles and assess the risk, and if the case requires it, pull someone from the story at least for a while, when pulling someone out from the country becomes an option. One of these episodes (during an operation in West Africa) was the occasion to remind the public to always think about all the people involved in a team and to fight back by mitigating risks.

Hannas Storm suggested a turn of phrase to describe the correct approach: “fighting forward rather than fighting back”, emphasising not only the risk assessment but also the need to have a conversation based on trust between the members of a team. She went on to explain how  the International News Safety Institute(INSI) works extensively with its members (including the BBC, CNN, Reuters, AFP, Globo and NHK) in order to kickstart conversations around safety and support journalists. The UK based charity works as a provider of training and advice for journalists working in dangerous or difficult situations. Showing some of their numbers, she noticed how also online harassment and domestic violence have also taken their toll. In what has become a “digital warzone”, just like a physical one, women are three times more likely to receive threats and online harassment than men are (according to a Demos report). 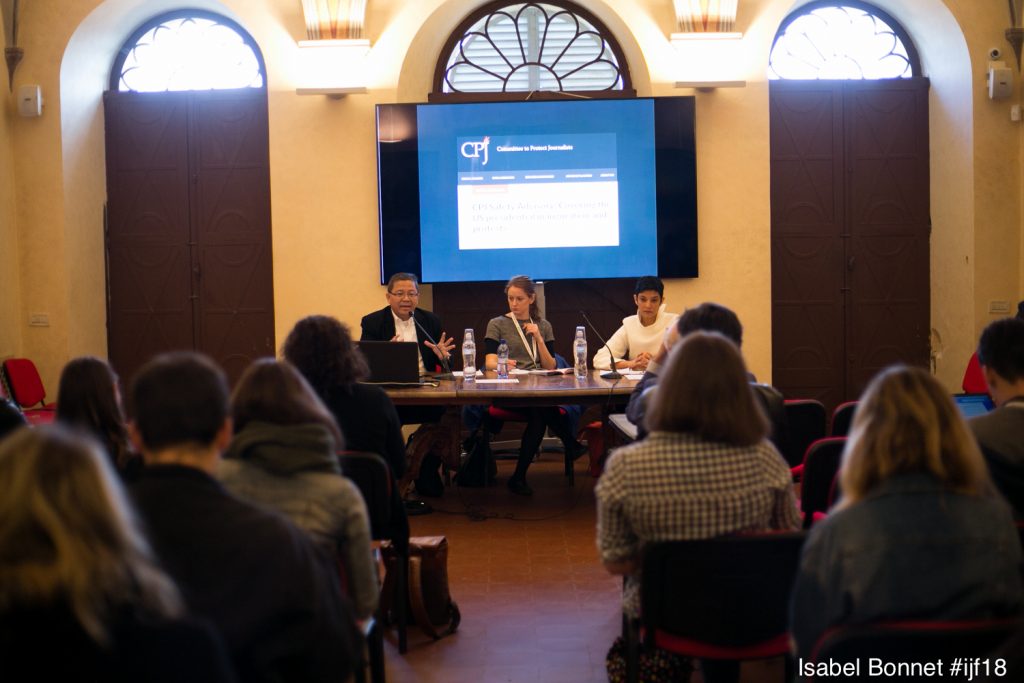 “We’re normalising the experience, we’re saying that just because it happens in this virtual landscape, it doesn’t mean it happens in real life” said Storm, explaining as one of the concerns is how we, as journalists and news community, separate the “news from the noise” (quoting Mark Little).

In order to touch on the practical side of things Storm went ahead to quote five pieces of advice from colleague Mary Hamilton (former executive editor of audience at The Guardian and current BBC portfolio manager) of which the ones she regarded as most crucial were: commissioning diverse writers on diverse topics to mitigate risks and addressing the threats from the very top of the management teams. Also, concluding her part, she stated that her biggest concern on the subject was that women journalists are self censoring, leaving or not even entering this domain out of fear of speaking up; this reinstates the dramatic need for a diversity of voices and for a sense of solidarity in this industry.

The end of the panel found John Nery summed up the key points of the panel: turning the fight forward and bearing in mind that online harassment needs to be taken serious and not regarded as something that simply washes away were his main takeaways.