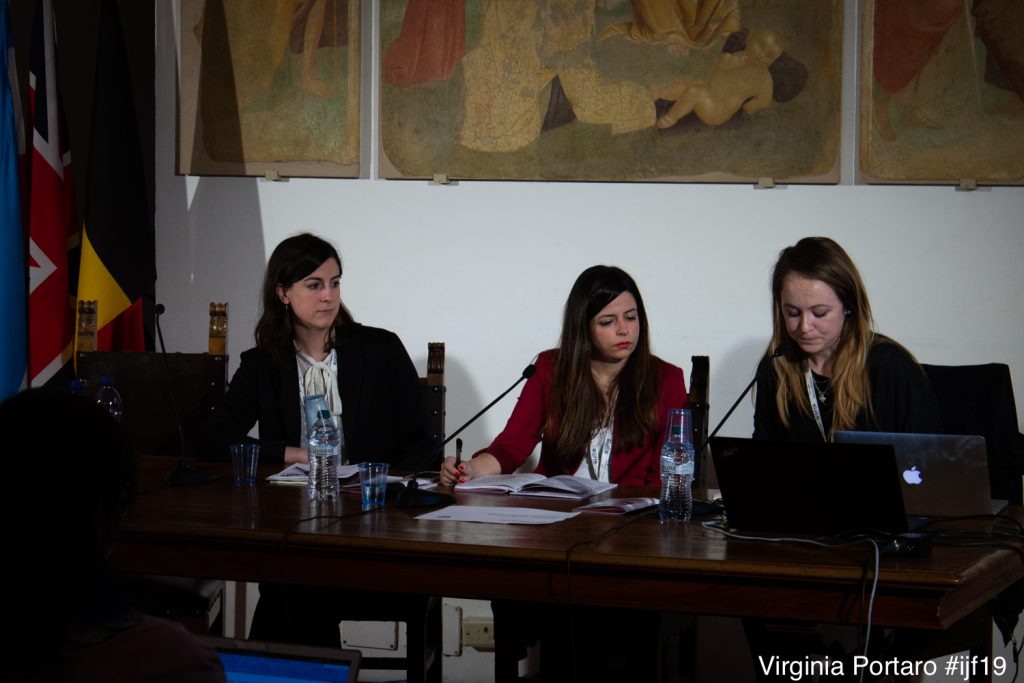 Migration stories have never been as relevant as in the years following the 2015 crisis. For the first time, Western media outlets have recognized that this complex issue deserves its own beat and, with levels of forced misplacement remaining high all over the globe, it will likely become increasingly important to cover the movement of people. Yet the interest of news organizations is waning down, and reporters who specialized in this subject, largely freelancers, describe the process of getting editors to publish their stories as exhausting and disenchanting.

“The conversation about refugees and migrants in Brussels was just so starkly different from what was actually happening on the ground”, says Tania Karas, US immigration Editor with PRI’s The World and managing editor at the news site Refugees Deeply. She adds: “you saw them viewed as a security situation, and in some ways of course it was, but they were actually refugees fleeing war”.

Speaking on the panel “Covering migration in a time of xenophobia: what’s missing in migration reporting?” at the International Journalism Festival, three journalists covering the beat reflect on what is wrong with migration reporting and propose solutions on how to improve it.

Words matter, and so does context.

Migration coverage can be roughly separated into two categories: people’s stories and policy stories. Too often, however, policy reporters use dehumanizing language, thereby minimizing the personal character of their implications. According to Tania, terms such as “illegal alien”, “national emergency” and “security crisis” are too often used by reporters and need to be contextualized within historical perspectives. She wonders, “is a few thousand people per month at the southern US border an actual emergency compared to numbers that we have historically seen? compared to the five thousand people a day that were landing in Lesbos in Greece in October of 2015? This is not an emergency that cannot be handled.”

Even when migratory fluxes reach crisis levels, describing them as a security issue is in essence misleading. “Insofar as it might be a crisis, it’s a crisis because of the way that we’ve handled it”, she continues, denouncing how the infrastructure built to manage migrant is more militarized than humanitarian. The migrant population directed to the US has changed rapidly over the past few years, shifting from prevalently seasonal workers to families and children seeking safety. However, the narrative in the media lacks nuanced explanations on why seeking asylum is not illegal under international law and is, in fact, a human right.

The geopolitics of migration

“We’re living in  an age in which the migration of people, which has occurred throughout human history and has shaped many of the countries in which we now live and many of the cultures in which we now live, has increasingly become not about movement but about border control, geopolitical interests, and profit”, says freelance journalist Caitlin Chandler. “It’s also about freedom: who can move and under which conditions”.

Within the migration beat, she believes one big topic is receiving hardly any media attention: how rich countries in the West are effectively outsourcing border controls to developing nations. Europe, in particular, collaborates with both Sudan and Libya for this purpose, propping up regimes that have notorious human rights violation records. In her reporting, Caitlin found that the European Union is “spending millions of dollars to try to prevent refugees, asylum seekers and migrants from transiting through Khartoum and out of Sudan onwards towards Europe”. Packaged as development aid, this intervention relegates people fleeing human rights abuse and violence to bureaucratic and physical limbos in unsafe third countries they cannot escape.

Tracking down the money trail to check how these EU funds are being used on the ground has been particularly difficult since both European institutions and the International Organization of Migration (IOM)  have not been willing to share information. As an intergovernmental organization charged with managing mass displacement in a way that respects the humanity and dignity of migrants and fosters cooperation, the IOM is not supposed to take an active role. However, Caitlin has reported that in reality, the IOM receives funding to deliver policy objectives for the European Union, which is ultimately to block people from reaching the continent’s shores.

Since Sudanese journalists are the targets of repeated threats and harassment and foreign reporters struggle with limited access and a dangerous environment, following the money is becoming increasingly difficult. Caitlin herself has been banned from re-entering Sudan following her latest publications.

Also reporting from Sudan, freelance journalist Sally Hayden talked to refugees who were asked to pay huge bribes to get assistance from the United Nations agency for Refugees (UNHCR) and even more money for resettlement to a country where they felt safe. At first in disbelief, she gathered a large number of testimonies that confirmed these allegations and, after 10 months of trying to convince editors, she finally managed to write the story for the New Humanitarian. Days after her story caught public attention, the UNCHR suspended resettlement from the country and launched an investigation, a measure which she took as confirmation that the problem she uncovered was systemic. She explains: “Refugees who could only turn to UNHCR for help because they were being exploited by everybody else were also being exploited by the people who were meant to be the ones helping them.”

As a result, many refugees felt abandoned by the system and compelled to continue their path to Libya, where they would find themselves at the hands of smugglers and exposed to more dangers. For example, Sally was contacted by a man who was intercepted by the Libyan coast guard and brought to a detention center located in a conflict zone and deprived of food or water. After verifying his claims, she tried to get him help by posting his messages on Twitter, where they went viral. Sally shares “for me that was shocking because these voices hadn’t been heard, and the amount of people who contacted me saying: ‘we don’t have this information, we don’t know what’s happening to these people’. Everything is being done to shut them down”.

How can the media improve migration coverage?

Tara thinks that news stories about migration to the United States need to paint a bigger picture. Exposing the root causes of mass movement, such as climate change, is fundamental to understand contemporary fluxes from Guatemala and Honduras, that are composed by many former farmers. Moreover, media coverage needs to look at the economic impact of migrant labour on the US market, and at the ways curbing it would impact the farming industry. Finally, claims made by President Trump that foreign aid can be used as a tool to stop migration need to be fact-checked by the media, since cutting development money is more likely to increase migration.

For Caitlin, the constant framing by the media and politicians associating migrants with crime has been misleading and damaging. She believes journalists should not only be responsible for reporting on human rights abuses, but also for introducing the public to political solutions to migration. So far, however, 18:55- 19:16 “there is really no attempt to envision what a world could look like in which there would be more legal migration pathways” she explains, where “for instance Africans could get work visas to come to the European Union for two or three years at a time, in the same way that Europeans go and work in Africa”.

Sally has three propositions that could help improve migration coverage. First of all, readers and professionals need to question more the information they receive from international organizations like the UN. Secondly, more support and resources should be given to freelancers; since their sources are often traumatized, the process of building relationships to get to information and then follow leads is very lengthy. Finally, Sally believes Western journalists should provide a platform for refugees to tell their stories in their own voices. She has helped some of her contacts publish Op Eds, but other organizations dedicated to this goal, such as the Refugee Journalism Project or the independently-run refugee newspaper Kanere, are in need of resources.

With anti-immigration sentiment rising all over the globe, comprehensive and responsible migration coverage is often met with hostility. “I’m not necessarily gonna change minds”, Sally concludes, “I just keep reminding myself: at least no one can say they didn’t know.”