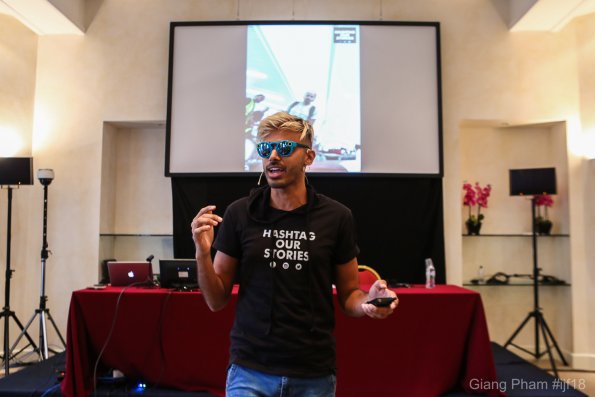 Yusuf Omar’s session on mobile storytelling tips for community journalism started on a surprising note and kept a packed room at the Sala Raffaello on its toes throughout the hour-long session where he presented tips and examples from his projects.

A self-designated MOJO, that is, a mobile journalist, Omar is the co-founder of Hashtag Our Stories, and has travelled through 27 countries in the past three months to teach communities how to use mobiles for community journalism. Except, he doesn’t necessarily agree with the term ‘community journalism’ associated most often with what he does.

“Almost every major story of our time has been reported by people with mobile phones,” he said, describing the fundamental shifts he’s noticed in his life since 9/11, citing the use of mobile-recorded videos from East Aleppo and in the Black Lives Matter movement. And if one agrees with his examples, then his next statement rings absolutely true – “Take out the word community, because this is just becoming journalism.”

Omar sees a world where community and citizen journalism, and traditional media are not mutually exclusive but can work together. He trusts people on the ground, armed with just their phones and basic knowledge of its working, to break the news. Journalists come into the picture by curating, fact-checking, and contextualizing this coverage. With this introduction to the current, community-based, participatory journalism culture that Omar envisioned, he presented tips on how to operationalize such a vision through various examples of his work which could be implemented in not just newsrooms but also universities and other spaces.

The first tip was to change the metrics by which success of content is measured in media. If journalism has to be important to communities, it needs to achieve what is important to them. And what is important for communities aren’t views or clicks on content, but rather what the content manages to solve or achieve. He talked about training garbage collectors in New Delhi, India, to record their lives, and seeing the results from the community months later when they started posting about the negative impact that the then-newly implemented Goods and Services Tax on recyclable goods was having on their livelihood. With the hashtag #GSTwaste, they were able to get the tax on recyclable goods reduced. The community of garbage pickers found a solution to their problem by journalism they practised themselves, making it that much more relevant to them. Another suggestion he had to offer was to let communities determine their own narratives and decide what stories are important to them.

He wants media platforms to stop worrying about the quality of video recordings, which are of worse quality when shot with a phone by citizens, instead of with a professional camera by trained journalists. He proclaimed that reality is the new quality. “We appreciate authenticity. We relate to real and raw content,” he said, thus indicating that news platforms shouldn’t be hesitant to use videos shot by citizens on their phones.

He also shared tips on how to ensure that videos shared on social media by platforms actually catch people’s eyes. He mentioned the importance of the first 3 seconds of the video to grab people’s attention, and ending the video with a question to encourage engagement, amongst other practical suggestions.

One of the most interesting suggestions he had to offer was related to Snapchat filters. He worked with sexual abuse survivors in India, where the faces of rape victims are always hidden in the media so as to not reveal their identity, even if the victims themselves are willing to do so. The usual methods used to hide their identity on-screen are by blurring their face or through the use of shadows, both of which are associated with shame. Omar allowed the survivors to talk about their experiences freely through the use of Snapchat filters which distort facial features. “Look beyond the gimmicks… See the technology baked into these incredible social media devices,” he emphasized.

Omar’s engaging session on mobile storytelling ended with a demonstration of technology that was part virtual reality, part social and part live, which he called “the perfect storm.” While virtual reality, social media, and live platforms weren’t necessarily revolutionary, he emphasized the potential of the new technology in possibly doing that.